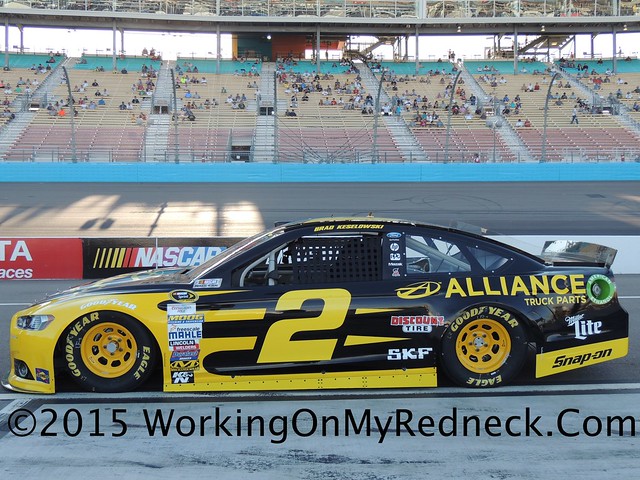 As the regular season ends and The Chase begins, it is the time to cull out the contenders from the pretenders.  Who will be the last man standing at Homestead? That question will be answered in just ten races!

This may be some kind of omen!

For the last few years I was able to determine when Fall occured by waiting for the leaves to fall off of the Busches!  Maybe this year either or both of them may be hanging with the big dogs all the way to Homestead.  Time will tell.

Nearly one quarter of the fantasy league, 5 players, have teamed up to ride shotgun with Blazingly Bad Brad Keselowski this weekend as The Chase opens up in Joliett, IL with the myAFibRisk.com 400.  It seems these five players, Karen The Highly Opinionated Southern Belle, Dawn, Cole The On Demand Baseball Player, Marc, and Doug, Jr. The Crowned Prince of Kettle Corn are all hedging bets with hopes of getting a one up on the rest of the fantasy league this weekend!

Almost as many of the players, four, are hanging with the Team Penske teammate, Joey Logano. Those four are Zee, Carlton The Doorman, Jim, aka Chiefy, and Jason The Latent Tie Die Hippie and All Around Edgy Dude.

Meanwhile, Lonna The Quilt Angel and Jerry The Buschwacker think that they have some inside info on Carl Edwards, and are hoping for another back flip from him this Sunday!

Lastly, Bernie The Bay Area Bandit and Password Queen and David The Mudslinging Throttle Jockey must be thinking that Kasey Kahne is going to be a Chase spoiler this week!

Again for those counting, that leaves nine players who ovbiously think that they are smarter than the other thirteen players this week.  But those independent thinkers, for this week, are really in bidnez for themselves!

Good luck to all at Chicagoland because it will not be just another saturday day in the park!