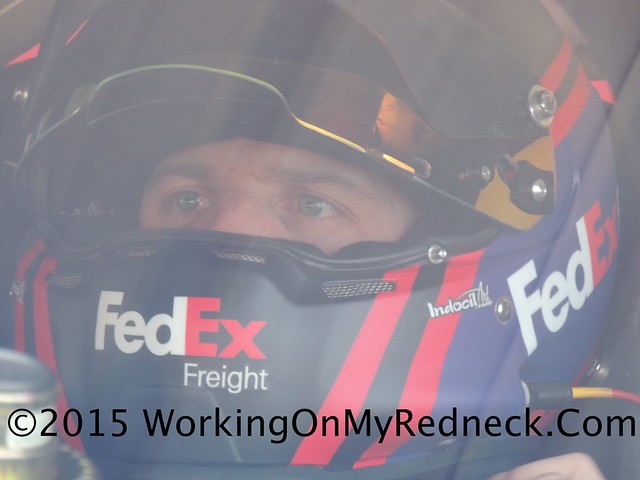 In a late race restart, Denny Hamlin soared to the top of the leaderboard and headed to Victory Lane in Sunday’s myAFibRisk.com 400 at Chicagoland Speedway, the first race in the Chase for the NASCAR Sprint Cup.

This week the highest scorer, Linda the Cookie Mom with 47 points, was also the only person who had correctly picked Denny Hamlin, the race winner!  So for her foresight she is the sole winner of this award this week!

Both Jerry The Buschwacker and Lonna The Quilt Angel really needed a great race to try to ascend up the totem pole, and propel them away from The Outhouse. That is just what they did, scoring 43 points with their selection of Carl Edwards.

The 42 points that Carole gathered up today via Kurt Busch’s fantastic third place finish has moved her more solidly into the top ten in the standings.

Jason the Latent Tie Dye Hippie and All Around Edgy Dude, Jim, aka Chiefy, and Carlton The Doorman all were rewarded 39 points from Joey Logano’s sixth place finish.

And rounding out the top five scorers for the first time this segment is Leon The Retired Airline Captain, Part-Time Cardiologist as well as Strawberry Picker, and Your Most Humble Sheriff, racking up a nifty 38 points from “Young Money”, Kyle Larson.

The single biggest mover this week goes to Bernie The Bay Area Bandit and Password Queen.  Unfortunately for The Password Queen she had a precipitous tumble from grace, falling eight (8) spots this week, landing in 14th place!

Two of our illustrious players, David The Mudslinging Throttle Jockey and Jerry The Buschwacker, also moved through the field like a warm knife through butter. The Buschwacker shot up five (5) spots in the standings, resting in 8th place.  Whereas The Throttle Jockey dropped like a Prom dress, falling five (5) positions after Chicagoland!

Edie, our leader last week, did not have a very good race.  When the checkered flag flew she tumbled from atop the standings ultimately landing in a tie for fifth place.

Rounding out the top five movers this week is a group of six players, Jim, aka Chiefy, Carole, Zee, Doug, Jr. The Crowned Prince of Kettle Corn, Jeremy The Coach, Leon Your Most Humble Sheriff, and Jeremy The Coach, each moved three (3) spots in the standings.  For Chiefy, Carole, Zee, The Crowned Prince of Kettle Corn, and Your Most Humble Sheriff, each player stepped up three (3) spots on the totem pole.  However, The Coach did not fair nearly as well, tumbling three (3) places this week.

This week we have a tie for the crappiest pick of the week. Both Bernie The Bay Area Bandit and David The Mudslinging Throttle Jockey will share the award of the crappiest pick. Both players were riding shotgun with Kasey Kahne and were only were able to salvage a 20 point tally.

We have a “Prince of The Poophouse” this week!  With Jeremy The Coach plunging three spots, that was enough to put him firmly on the throne, and in full control of The Outhouse!

Next week the haulers will be rolling into Louden, N.H. which is about 75 miles Northwest of Bean Town, better known as Boston, for round number two in The Chase.  So if you are up in that neck of the woods, please come to Boston!