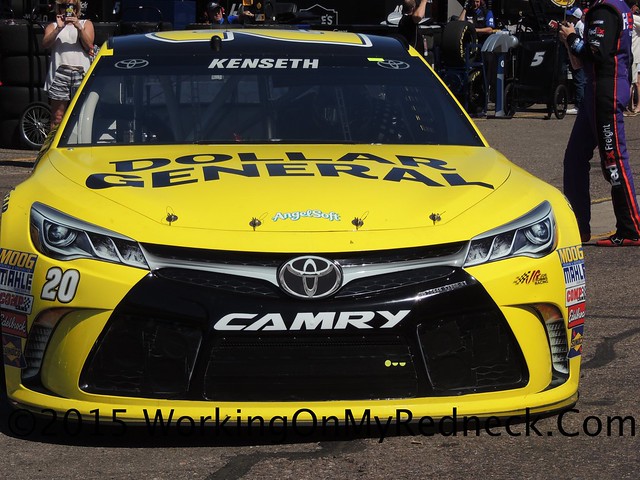 Matt Kenseth gassed his way to victory in Sunday’s Sylvania 300 at New Hampshire Motor Speedway, driving past Kevin Harvick, who ran out of gas with three laps remaining, to win the second event in the 10-race Chase for the NASCAR Sprint Cup playoffs.

Kenseth led 27 of the 300 laps, powering the Joe Gibbs Racing No. 20 Toyota to a 8.942-second margin of victory over teammate Denny Hamlin at the checkered flag. This was his fifth win of the season was his second at the 1.058-mile track and the 36th of hisSprint Cup career.

The win automatically advances Kenseth into the Chase’s Contender Round, the next three-race stage of the playoffs. He joins Hamlin, last week’s winner at Chicagoland Speedway, among the 12 drivers who will avoid elimination after next weekend’s race at Dover International Speedway.

This week we have a duo who are in the fraternity this week.  Both Edie and Zee picked Matt Kenseth as their choice to win at Louden, and how fortuitous that pick was for both of them. These two ladies grabbed a very important 47 points at the 1/3 waypoint in the final segment.

It appeared that Jeremy The Coach must have motivated Denny Hamlin through some hocus-pocus coach thing, because in the second half of the race Hamlin continually moved forward through the pack to finish in the runner-up position, giving The Coach a very nice score of 43 points.

There was a trio of players who scored 41 points this week.  Brandon and Linda The Cookie Mom were in Joey Logano’s rooting section all race.  Whereas Cole The On Demand Baseball Player was “Sticking With The Biff”, even though Biffle had not had a decent finish for most of this season.  Nevertheless, these three palyers were playing with the big dogs at Louden!

We haven’t heard much in a while from A&M Aggie Sue.  This week she has stepped out of her hiding place to grab 40 points when Carl Edwards rolled to fifth place finish.

Rounding out the top five scorers for this week is Doug The Former Mudslinger and Psychic, Turned Kettle Corn Dude.  The Kettle Corn Dude was rooting for Mr. Six-Time, Jimmie Johnson, and garnered 38 points.

To sum up our standings after Louden in one word would be EXPLOSION!

Every single player exchanged places with someone in the standings.  Some people rocketed up and some people plummeted down, but nobody reamined in their previous places.

Two of our previous top five players, Dawn and Karen The Highly Opinionated Southern Belle, dropped much like a parachutist falls from an airplane without a packed chute!  Each of these ladies dropped eleven (11) spots, landing in a four-way tie for 13th place!

Likewise, our former points leader last week, Jim, aka Chiefy, fell from the top spot like a person drops a bad habit!  Chiefy slid ten (10) positions, landing all the waydown in 11th place  this week.

On the positive side of the movement scale, Zee climbed up eight (8) places to reside this week in 4th place!

The father-son duo of Doug The Former Mudslinger and Psychic, Turned Kettle Corn Dude and Doug, Jr The Crowned Prince Of Kettle Corn each transited six (6) spots.  The Psychic Dude had a great race stepping up six places, now sitting in 12th place.  However, this week was not so nice to The Crowned Prince.  He crumbled and fell six places to sit just 5 points away from moving into, and redecorating The Outhouse!

Rounding out the top five movers of the week is a group of four players.  Brandon, Marc, and Jeremy The Coach rose to the occassion and stepped up five (5) places sitting in 6th, 8th, and 17th, respectively.  However, Carlton The Doorman fell five (5) places, landing in 15th.  Additionally, Leon The Retired Airline Captain, Part-Time Cardiologist and Strawberry Pick, and Your Most Humble Sheriff, to use a very apropos aviation term, went into an inverted flat spin and was just barely able to recover prior to ground impact. Nvertheless, Your Most Humble Sheriff pulled out of that flat spin just in time to take over, and move into The Outhouse Award this week!

This week there is a five way tie for the crappiest pick of the week.  You know that when you can only secure a single digit for your total score. you are most definitley in the running for that award.  Well this week not only did we have one player gather up a single digit score, there were five of them!  So this week Doug, Jr. The Crowned Prince of Kettle Corn, Jim, aka Chiefy, Dawn, Karen The Highly Opinionated Southern Belle, and Your Most Humble Sheriff will all have to share this award!

Next week the show moves to Dover, DE, and The Monster Mile.  When the checkered flag falls at Dover there weill be four drivers eliminated.  That would mean that there are twelve drivers who really need to “take care of business”!

TIL NEXT TIME, PULL YOUR GLOVES UP, FLIP YOUR VISOR DOWN, AND LET’S GO REACIN’!