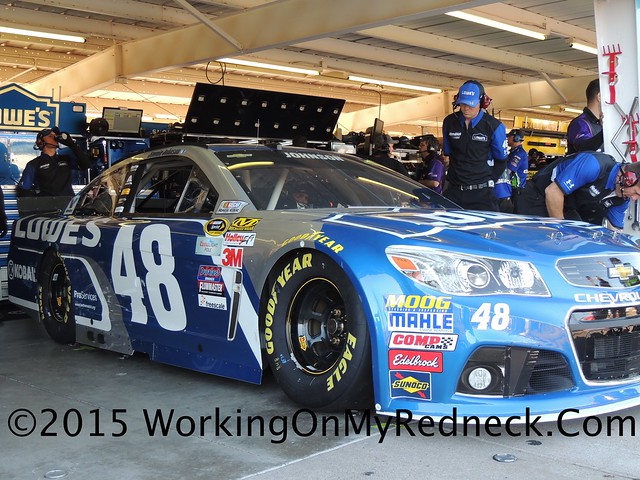 This week The Chase comes to it’s first elimination race, the self-cleaning race track known as Dover International Speedway.  For four of the drivers that end up in the bottom of four slots, postitions 13-16 it will be the end of the line.  Or as one of my baseball heroes, Lawrence Peter “Yogi” Berra, who passed away last week, would anayze the situation:  To the four drivers at the bottom of The Chase standings, when you get to the fork in the road —– take it!

This week there are five players, nearly one fourth of all of the players. who obviously did their homework on Dover.  Dawn, Jerry The Buschwacker, Doug, Jr. The Crowned Prince of Kettle Corn, Lonna The Quilt Angel, and Leon Your Most Humble Sheriff all must have realized that Jimmie Johnson is the winningst driver at Dover among all the active Sprint Cup drivers!  Mr. Six-Pack has ten (10) career victories at this concrete jungle, and therefore, the most obvious choice this week!

There are almost as many players in the Kyle Busch camp this week.  The four players that will be charging their Interstate Batteries on Sunday with KyBu are Marc, Dan The Numbers Cruncher, A&M Aggie Sue, and Doug The Former Mudslinger and Psychic, Turned Kettle Corn Dude.

However, Bernie The Bay Area Bandit and Password Queen, Jim, aka Chiefy, and Cole The On Demand Baseball Player are really hoping that this is the week that “Young Money”, Kyle Larson, will get his first Sprint Cup series victory.

Both Brandon and Linda The Cookie Mom are putting all their eggs in the basket of the St. Louis Beerwagon, better know as the #4 Budweiser Chevy driven by Kevin Harvick.

But as always there are a few independent thinkers this week.  This week we have three players that are in bidnez for themselves!

With Dover being an elimination race, and being classified as a short track on streriods, I can say that there will be some bruised egos, some lost tempers, some crumpled sheet metal, and quite possibilty a right cross or two thrown after the race!  So my short track warning comes into play once again:  “Drivers and crewmembers check your egos, your tempers, and your weapons at the pit gate”!

“Don’t give me no lines, and keep your hands to yourself!”

TIL NEXT TIME, PULL YOUR GLOVES UP, FLIP YOUR VISOR DOWN, AND LET’S GO RACIN!