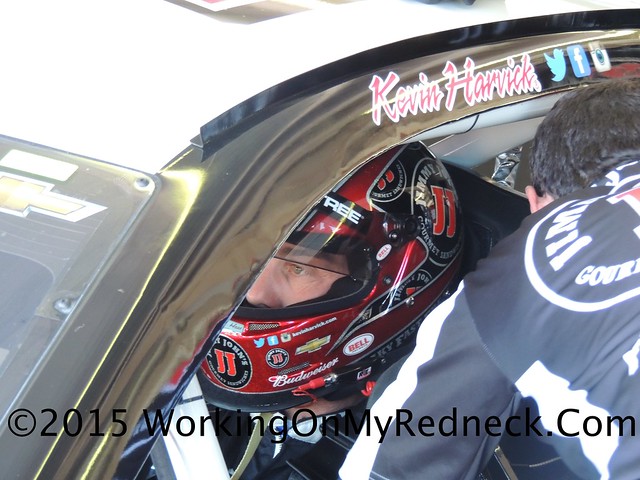 Kevin Harvick and his Stewart-Haas Racing team avoided the mistakes they made in the first two races of the Chase for the Sprint Cup Championship and logged a dominating victory in the third race of The Chase, an elimination race!

Harvick, who led all but 42 of 400 laps, won Sunday’s race at Dover International Speedway and in doing so, moved on to the second round of the elimination-format playoff.

Fraternal Order Of The Go Fast

This week we had two players who selected the race winner.  Both Brandon amd Linda The Cookie Mom were riding shotgun with The Freaky Fast Kevin Harvick and logging a cool 48 points for the victory!

Also doing well this week is the trio of Doug The Former Mudslinger and Psychic, Turned Kettle Corn Dude, A&M Aggie Sue, Marc, and Dan The Numbers Cruncher.  All three of these players thought that Kyle Busch would run to the front of the filed and take the win.  KyBu did not win the race, however he did finish second and gave these players a nifty 43 points!

Carole, Jason The Latent Tie Dye Hippie and All Around Edgy Dude, as well Karen The Highly Opinionated Southern Belle were hoping that the hottest driver over the last month, Matt Kenseth, would pull off another victory in race #3 of The Chase.  It was not to be at Dover, but Kenseth did pull off a seventh place finish, and gave the trio a cool 38 points.

Another trio of players faired very well after the checkered flag flew at Dover.  Jim, aka Chiefy, Cole The On Demand Baseball Player, and Bernie The Bay Area Bandit and Password Queen added 35 points to their early segment points talley, thanks to Kyle Larson.

When Jimmie Johnson went to the garage with rear end problems early in the race, it was felt whole–heartedly by five players!  Jerry The Buschwacker took the biggest hit of those five players this week in the standings.  His three (3) total points precipitated a huge ten (10) place plunge for The Buschwacker!

The second biggest mover this week is Linda The Cookie Mom.  The Cookie Mom had a great race rocketing up in the standings seven (7) spots, all thanks to her choice of Kevin Harvick!

Still another player who migrated many places after Dover was Dawn.  Dawn, too, suffered the misfortunes of having Jimmie Johnson and the net result was her tumble of six (6) spots this week!

Conversely, Dan The Numbers Dude, was able to sneak up five (5) places with his very nice 43 points garnered.

Rounding out the top five movers this week is Zee and Brandon.  Zee only took a moderately small hit in the standings, falling only three (3) spots.  Whereas her counterpart in movement, Brendon, climbed up three (3) spots on the totem pled this week.

This week we once again have a slew of players that only were able to add a single digit score to their tally after Dover!  The five players who selected Mr. Six-Pack, Jimmie Johnson, really got hosed! Doug, Jr. The Crowned Prince of Kettle Corn, Jerry The Buschwacker, Lonna The Quilt Angel, Dawn, and Leon the Retired Airline Captain, Part-Time Cardiologist as well as Stawberry Picker, and Your Most Humble Sheriff, scored a cumulative 15 points.  However, if you divide the 15 points by the five players, the real score logged by each player this week was a pitifully microscopic 3 points each!  Therefore, these five players all share in The Crappiest Pick Of The Week award.

Next week NASCAR has it’s last home game of the year.  Both the XFINITY and the Sprint Cup will be racing at Charlotte Motor Speedway, while the Camping World Trucks are off until the Talladega race.

With Dover being an elimination race, and four drivers now falling out of the next round of The Chase, I wonder what becomes of the broken hearted?