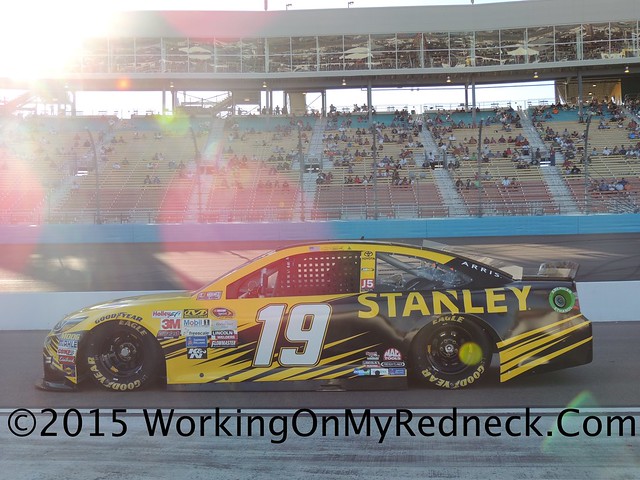 This week marks a fresh new start for the twelve drivers that progressed past Dover and into the Contender Round.  What was most spectacular last week was watching Kevin Harvick dominate and put an old fashioned blue collar butt whopping on the other 42 drivers!  However, that was last week and this is this week.  But in the back of your mind you have to asking yourself, can Harvick continue his dominating ways and stink up the show this week at the Charlotte Motor Speedway?

If Harvick is not the strong horse at Charlotte this week, then who will be in the spotlight?

Let us take a look at what the prevailing opinions of The Redneck Fantasy League players are this week!

This week Carl Edwards has the majority of votes, five players in total, and all are eagerly awaiting the dropping of the green flag.  In fact, Carlton The Doorman, Edie, Marc, Karen The Highly Opinionated Southern Belle, and Leon Your Most Humble Sheriff are all dragging out their Stanley Tools and accomplishing their “honey do” lists prior to the Saturday night race at Charlotte.  Then they will all settle in, buckle up, and watch the Bank of America 500.

The word filtering out through The Redneck grapevine is that there are three players, Carole, Zee, and Doug, Jr. The Crowned Prince of Kettle Corn, who firmly believe that Kevin Harvick can pull off another dramtic win in the first race of this, The Contender Round.  If Harvick can do that, it will punch his ticket through to the next segment.

Both Dawn and Jerry The Buschwacker are teaming up to support, and root for, one of the hottest drivers of the summer, Matt Kenseth.

Even though the summertime fire underneath Kyle Busch has begun to smolder, both Lonna The Quilt Angel and Brandon are hoping that, unlike Tony Stewart lately, where there is smoke there is a fire!

Lastly, Jim, aka Chiefy is teaming up with Bernie The Bay Area Bandit and both are hoping that Jimmie Johnson, now eliminated from the championship chase, will become a “Chase Spoiler” this week.

This week we have eight independepent thinkers, or more likely eight players who are in bidnez for themselves!

The competition shifts gears this week, there are a few of the surviving twelve drivers that have bullseyes painted on the back of their race cars, and therefore they are wanted dead or alive!