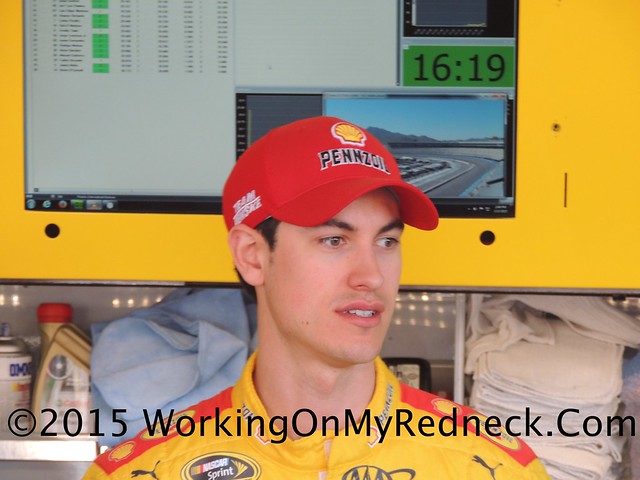 Logano led 227 of 334 laps in the Bank of America 500, which was postponed by heavy Saturday night rain. His fourth win of the season was his first at the 1.5-mile track, and 12th of his Sprint Cup Series career.

This victory punches Logano’s ticket to the Contender Round, making him one of the final eight title-eligible drivers in the Eliminator Round!

Fraternal Order Of The Go Fast

This week we have a trio who were our biggest scorers of the week.  Doug, Jr. The Crowned Prince of Kettle Corn, Zee and Carole were putting all their marbles in Freaky Fast Kevin Harvick’s marble bag! Fortunately for these players, Harvick rewarded them with 42 points, and most importantly, their marble stash is safe for another week!

There was a group of six players, more than one quarter of the fantasy league, that racked up 39 points after Charlotte.  Five of the six players, Karen The Highly Opinionated Southern Belle, Marc, Edie, Carlton The Doorman, and Leon Your Most Humble Sheriff were riding shotgun with Carl Edwards today.  The sixth player, A&M Aggie Sue was hoping that the driver formerly known as “The Outlaw”, Kurt Busch, would win the race and punch his ticket to the next round.  Neither of these two drivers won the race today, and must continue to press forward for the next two races in The Contender Round.

Rolling into the third highest scorer position of the week is Doug The Former Mudslinger and Psychic, Turned Kettle Corn Dude.  This week The Kettle Corn Dude was wagering heavily on “Big Daddy”, Jeff Gordon, and for that Doug received 37 points!

Our resident accountant, Dan The Numbers Cruncher, was betting the farm, not his accounting firm, that Blazingly Bad Brad Keselowski would be able to get out front and show everyone the fast way around Charlottte. Bad Brad was only able to secure a ninth place finish and that gave The Numbers Dude 35 points for the week.

Rounding out the top five scorers of the week is Cole The On Demand Baseball Player.  Cole participated in the Clint Bowyer ride along program and logged a cool 34 points this week!

This was an interesting week in that 21 of the 22 players changed positions. Although there was widespread movement, there were not huge position changes.  The only player who maintained his previous position this week is Jason The Latent Tie Dye Hippie and All Around Edgy Dude!

Having said all that, the single biggest mover was Linda The Cookie Mom. Scoring only one (1) point for the week, and falling six (6) places, will generally make you drop in the standings like a bad habit!  One would think that she could possibly be making a mid-segment charge to The Outhouse!

Brandon is charging equally as hard for The Outhouse, loosing five (5) spots on the totem pole this week.

Dan The Numbers Cruncher and Carlton The Doorman each ratcheted up in the standings three (3) positions.  Conversely, both Dawn and Jim, aka Chiefy, slipped down three (3) spots.

The remaining players moved up or down two or one place for the week.

There were four players who logged only a single digit for their Charlotte score.  We all know that when you can only muster a single digit for your total score your Sunday was pretty brown!  But it was Linda The Cookie Mom who was only able to manage just one single point from pretty boy Kasey Kahne this week.  The just reward for that single point is that The Cookie Mom recieves The Crappiest Pick of The Week Award, hands down.

Additionally, we have a new Princess of The Poophouse this week! Our new Guardian Of The Gashouse is was one of the four players to only muster up a single digit for her weekly tally. With Dawn’s 3 points for the week, she has evicted yours truly, Leon Your Most Humble Sheriff, from the control of The Outhouse!

Next week the travelling circus moves on to Kansas.  When the race is over next week there will be four drivers closer to be “dust in the wind”!