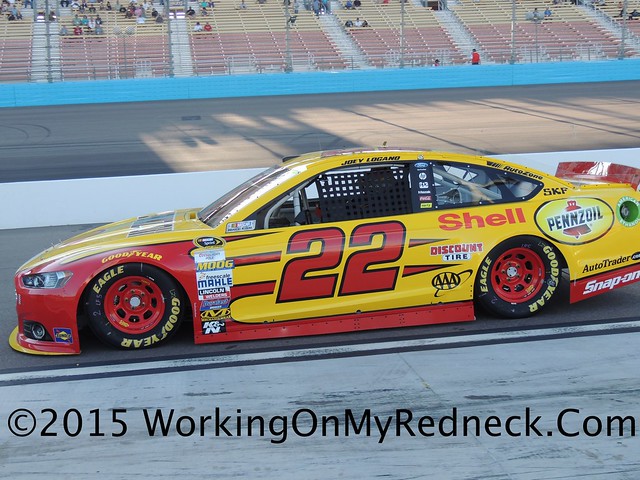 There is saying in NASCAR that goes something like this; block me once and I most likely will cut you some slack, however, block me twice and you are most likely taking a trip to the fence!

That, in essence, was what transpired between Joey Logano and the race leader, Matt Kenseth, in Turn 1 with less than five laps left in the race at the Kansas Speedway.

Logano went on to win the race after a green-white-checkered-flag restart that sent the race two laps past its scheduled distance of 267 laps. The driver of the No. 22 Penske Ford has monopolized the Contender Round of the Chase for the NASCAR Sprint Cup, having won back-to-back races at Charlotte and Kansas!

Both Edie and Jeremy The Coach were placing their future success in this segment with Joey Logano, and that paid of big dividends at Kansas!  Joey Logano went back-to-back with victories and Edie and The Coach garnered a whopping 47points.

Jerry The Buschwacker, Dan The Numbers Cruncher, and Brandon all rode high on the hog at Kansas.  All three of these players logged a nifty 38 points resulting from Kurt Busch’s 6th place finish.

Rounding out our list of top five scorers for Kansas is Linda The Cookie Mom and Bernie The Bay Area Bandit and Password Queen who secured 37 points from Carl Edwards’ 8th place finish.

Unlike last week where there were ninetieen players who moved around in the standings, this week only eleven players changed spots with someone!

The single biggest mover for the week is our single digit scorer, Marc, who plummeted six (6) places in the standings, landing in tenth position.

However on positive side Zee climbed up the standing by three (3) positions, now owning third place.

Brandon, and Karen the Highly Opinionated Southern Belle, as well as Dan the Numbers Dude all faired very well by steppping up two places in the standings.

The remaining players climbed up one or slid down one or two spots on the leader pole.

The crappiest pick of the week was an extremely easy choice. There was only one player who was so fortunate as to grab just a single digit score for his weekly playing extravaganza, and it happens to be Marc!  You see Marc was really suffering from some delusion that Tony Stewart would break out from his two year winless drought and drive into Victory Lane. Smoke only was able to deliver a nine (9) point today for Marc, and therby allowing Marc to win this week’s crappiest pick of the week award!

Speaking about all things crappy, for the second week in a row Dawn remains mired down deep in The Outhouse!  However, there could be a rescue on the horizon, Leon Your Most Humble Sheriff is only four (4) points away from contesting for the throne!

Next week is not just another race, this is Talladega!