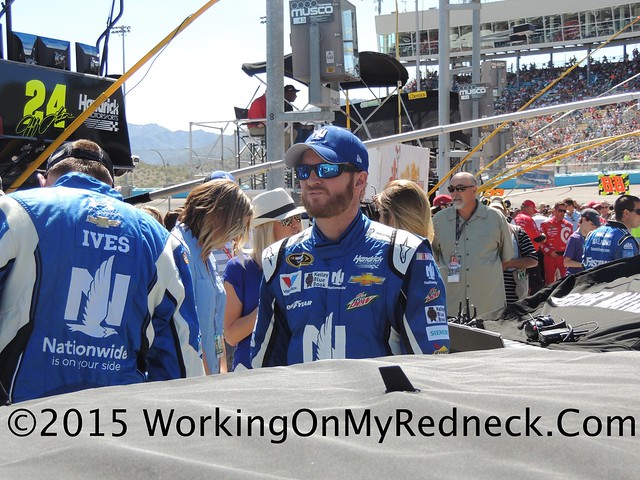 This week at the Talladega Superspeedway the plot thickens in more ways than you can think of!  Not only is this race a race of courage and skill, a 200 miles per hour chess match, but additionally, it is also the elimination race for the second round in The Chase!

Since Joey Logano has had the field covered in the two previous races, and took home the hardware, that back-to-back winning streak has prevented other Chase contenders from winning a race in this segment and locking themselves into the next round.

Of the twelve drivers that at vying for those precious eight transfer spots in the next round, there are eight drivers that could easily wind up in the bottom four and face elimination!  So to say that the Talladega race will have far and wide implications would be a collossal understatement!

The easiest way to write about our picks at this Talladega race would be to devulge who does not have Dale Earnhardt, Jr. as their selection to win. However, that would be the easy way out!  So I won’t do that this week.

It is safe to say that most of The Redneck Fantasy League has come to their senses when it comes to restrictor plate racing and selecting a driver.  There is only one driver to pick, he was once known as the Pied Piper of Talladega, Dale Earnhardt, Jr.! There was once a time, when Junior was driving the DEI #8 Chevy, that he virtually owned this track.  Having been to a few Talldega races, there are only two bumper stickers/window decals that are allowed in this part of the country, Alabama/Roll Tide and Dale Earnhardt,Jr.!

This year he made his way back to victory lane in April to re-establish his winning ways at ‘Dega.  So for the return visit A&M Aggie Sue, Doug, Jr. The Crowned Prince of Kettle Corn, Jason The Latent Tie Dye Hippie and All-Around Edgy Dude, Jeremy The Coach, Birthday Boy Cole The On Demand Baseball Player, Jim, aka Chiefy, Bernie The Bay Area Bandit and Password Queen, Doug The Former Mudslinger and Psychic, Turned Kettle Corn Dude, Linda The Cookie Mom, Lonna The Quilt Angel, Carlton The Doorman, Dawn NN (No Nickname), Karen The Hightly Opinionated Southen Belle, and yours truly, Leon The Retired Airline Captain, Part-Time Cardiologist and Strawberry Picker, and Your Most Humble Sheriff are all stuffed in Dale Jr’s HMS Diet Mnt. Dew #88 Chevy, and riding shotgun at the world’s longest oval race track, Talladega!

Both Carole NN (No Nickname) and Dan The Numbers Cruncher will be banking on the Delivernator, Denny Hamlin, to try to upset the entire Redneck Fantasy League Sunday.

Additionally, Zee NN (No Nickname)and Edie NN (No Nickname) will be rooting that their man, Mr. Six Pack, Jimmie Johnson, can play Chase spoiler and grab the victory away from all those “Chasers”!

For the remaining four players, who for some really uncertain reason are even more outsiders that the previous four players rooting for either JJ of DH, enjoy your week of being in bidnez for yourselves!

My final observation for this week is that there will be little to no movement from within the scoring pylon with 14 players all choosing my man, Junior, this week for Talladega!

Just as a side note, by the time most of you will read this post Wednesday morning, I will be well into my return trip from Fresno, CA back to Yuma, AZ. I had a great time with my two sons, Jason the Latent Tie Dye Hippie and All-Around Edgy Dude, as well as Jeremy The Coach.  But the 1,000 mile roundtrip was really to celebrate my one and only grandson, Cole The On Demand Baseball Player, reaching a milestone, his 13th birthday!

Good luck to all as the traveling circus returns to Sweet Home, Alabama!

TIL NEXT TIME, PULL YOUR GLOVES UP, FLIP OUR VISOR DOWN, AND LET’S GO RAIN’!