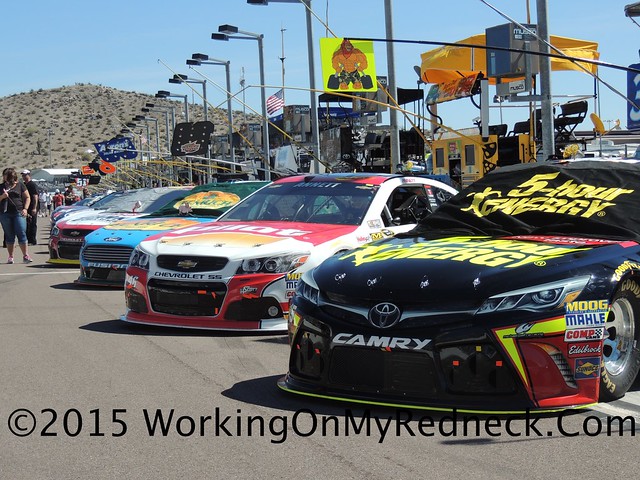 With just five races left in the 2015 season there is a storm brewing on the horizon in The Redneck Fantasy League Championship for 2015!

Let me just brush up your memory from 2014.  Last year the player who scored the least amount of points for the entrie 36 races, Edie NN, and was in control of The Outhouse more weeks than any other player, was Edie.

Having had, by all accounts, a miserabel 2014, Miss Edie NN (No Nickname), has absolutely been on fire this year!  She has scored a total of 1,129 points for 31 races this year. For all you math majors that is an average score of 36.41 points per race!  For those thta do not have their calculator handy, that means that Edie’s NN picks have averaged an 8th place finish for all 31 races.  That average, for this fantasy league, is hitting is like hitting .400 in the major leagues, like winning 25 games per year as pitcher, like stealing 75 bases!  Edie NN is the player with the bulls eye painted on her back with five races to go.  Edie NN holds a 43 point lead, that is one full race, on her closest competitor for the 2015 Redneck Fantasy League Championship award.

The player sitting in third place in the championship fight is Jeremy The Coach with a combined total of 1,009 points.  For this year The Coach has averaged 32.54 points per race.

In fourth place after 31 races is Jerry The Buschwacker with a combined total of 1,008 points, just one point behind The Coach.  The Buschwacker’s average per race is 32.51 points per race.

Rounding out the top five players vying for the Championship money, and 124 points behind the leader, is Karen The Highly Opinionated Southern Belle.  The Outspoken One has logged 1,005 points, and averaging 32.41 points per race this year!

Below is a complete list of the remaining seventeen players and their total for the first 31 races:

Even though Edie NN holds a 43 point lead on her nearest competitor, it is not an insurmountalbe gap to overcome!  She could have a single digit race and/or a couple of poor finishes to thighten up the race for the championship money and plaque!  So don’t throw in the towel quite yet!

Just remember, I looked up this information so that you would not have to!

If you have forgotten, this is a winner take all pot, not a payout to the top five scorers!

From my position in both the last segment and the championship pots all I can do is Imagine!  “You might say that I am a dreamer, but I am not the only one!”