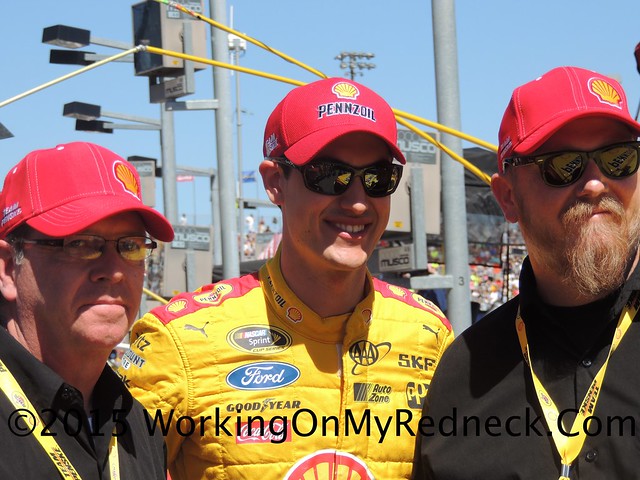 Joey Logano didn’t need to win Sunday at Talladega Superspeedway to advance to the third round of the Chase for the Sprint Cup Championship, but he did. Dale Earnhardt Jr. did need to win to advance and he didn’t, though determining those results took an extended examination of video by NASCAR officials.

As a result of a wild finish Sunday – one which turned chaotic because of a big wreck mid-pack on a green-white-checkered restart just as Earnhardt appeared to be passing Logano for the lead – Earnhardt was ousted from the playoffs!

Team Penske’s Logano won his third straight Chase race, sweeping all three races in this segment and eliminating four of his competitors from The Chase!

This week there was only one player, David The Mudslinging Throttle Jockey, who picked the winner, Joey Logano, and therefore was the highest scorer of the week grabbing a nifty 47 points.

We have a new leader at the top of the totem pole this week!  With A&M Aggies Sue’s 44 points scored this week she has deposed EdieNN (No Nickname) from the top position.  And if this was not breaking news enough for The Redneck Fantasy League, I have been sent a covert communique from an anonymous source that Edie was involved in some undercover work when she lived in Las Vegas.  The communique informed me that Edie went by the secret code name of “Las Vegas Superstar”!  Since this was information from the previous century, I assume that the statute of limitations has expired, and the further use of that moniker would not impose any liabilities to this web site.

As I wrote on the mid-week post enumerating our picks, it would be easier to announce who did not have Dale Jr, this week, but that would be a writer’s cop-out!  Nevertheless, there were fourteen players who selected The Pied Piper of Talladega, Dale Jr. as their choice.  It almost came to fruition today, the idea of Dale Jr winning this race.  Upon closer examination of the NASCAR video, there was evidence that Junior was within about 100 yards of being declared the winner of the race.  He was proceeding to blow by Logano going into turn #1 on the restart when the caution flag flew.  But that is now water under the bridge.

All by himself as the third highest scorer of the week is Jerry The Buschwacker, grabbing 37 points for Martin Truex.Jr’s 7th palce finish.

And rounding out the top five scorers this week is Zee NN (No Nickname) receiving 27 points from Jimmie Johnson’s 18th place finish.

With 2/3 of The Redneck Fantasy League selecting Dale Earnhardt, Jr. this week, it was quite surprising that eighteen of the twenty-two players swapped positions this week!  The only players who held station this week were, David The Mudslinging Throttle Jockey, Doug Jr. The Crowned Prince of Kettle Corn, Leon Your Most Humnble Sheriff, and DawnNN (No Nickname)!

Dan The Numbers Cruncher was the biggest mover of the week plummeting seven (7) spots to land in 15th place.

Everyone else not mentioned above either moved up or down one spot this wek.

Even though Dawn NN (No Nickname) scored a nifty 44 points this week, she could not make any progress on getting out of The Outhouse.  Both Leon Your Most Humble Sheriff and Doug Jr. The Crowned Prince of Kettle Corn scored the same number of points because all three had chosen Dale Jr, at Talladega.

The Eliminator Round begins next Sunday with the race at Martinsville.  For those four drivers who failed to move on to the next round there is always next year.  All I can say is “Happy Trails To You”!

Good luck to all!!