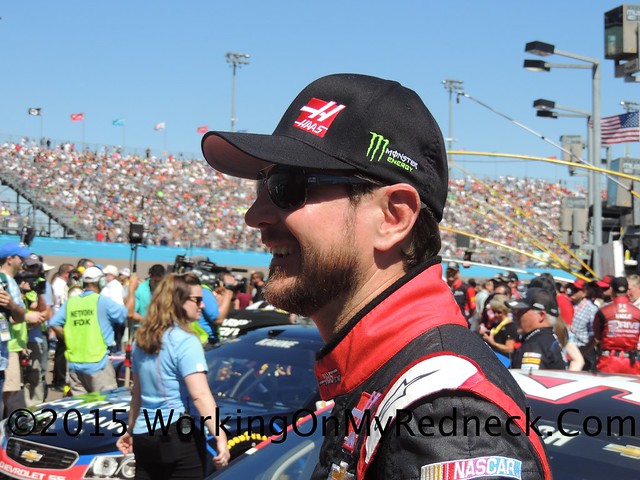 This week NASCAR moves from the biggest, baddest, race track on the circuit, where sometimes there are flying lesson offered– to the smallest, slowest track.  But oh my friend do not confuse small and slow with a mudane and uninteresting.  No, far from it my Redneck friends!  Martinsville Speedway has often been a race where scores get settled, egos get bruised, tempers get lost, knuckles get skinned, jaws get socked, and sheet metal gets crumpled!  As we all know, race car drivers have very good and very long memories, whick can make for some very entertaining side storylines during the race!

The Goody’s Headache Relief Shot 500 at Martinsville will be more than the usual short track, beating and banging, tempers flaring race.  If you add all those factors to the high pressure of The Chase and trying to make it all the way to Homestead, this Sunday could be an outstanding short track race for the Sprint Cup boys and girl.

We have two drivers, this week, that have four players each in their corner.  Because the driver formally known as “Outlaw”, Kurt Busch is still in The Chase, I selected his photo to accompany this post. In KuBu’s corner this week are Marc NN (No Nickname), Linda The Cookie Mom, Carlton The Doorman, and Karen The Highly Opinionated Southern Belle all of which have nothing in common except for the fact that they desperately need a win, and are hoping that KuBu can deliver it to them at Martinsville.

The four players that are putting their marbles in Denny Hamlin’s marble bag this week are DawnNN (No Nickname), Lonna The Quilt Angel, Edie The Las Vegas Super Star, and Jim, aka Chiefy.

We have another pair of drivers that have a rooting section of three players.  Bernie The Bay Area Bandit and Password Queen, Jeremy The Coach, and David The Mudslinging Throttle Jockey will be in the copilot’s seat of the JGR #18 with “Rowdy” Kyle Busch, and more than likely feasting on bags of those M&M crispies.

Additionally, Cole The On Demand Baseball Player, A&M Aggie Sue, and Leon Your Most Humble Sheriff will be hoping that, Jeff Gordon, one of the winningest active drivers at Martinsville, can pull out a victory in his very last race at that facility, and roll into Homestead as one of the four drivers running for the championship.

On the other hand, Carole NN (No Nickname) and Jason The Latent Tie Dye Hippie and All-Around Edgy Dude are both hanging with Jimmie Johnson Sunday.

Lastly, Dan The Numbers Cruncher and Doug, Jr. The Crowned Prince of Kettle Corn think that the Furniture Row driver, Martin Truex, Jr., can punch his ticket to Homestead with a victory at Martinsville.

For all you mathmeticians, that leaves four players that are in bidnez for themselves this week.

For those who feel that they were wronged during the course of this season, Martinsville is the last good chance to get their retribution!  It is their time to stand up, for their actions to be executed, and don’t back down!