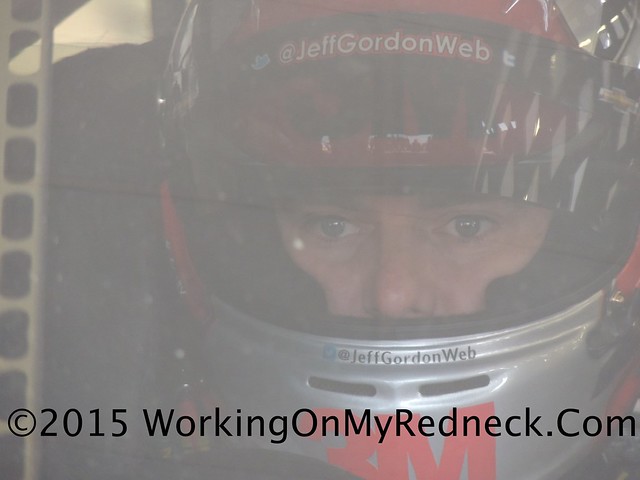 He is going to Homestead!!

Jeff Gordon won the Goody’s Headache Relief Shot 500 on Sunday at Martinsville Speedway in a dramatic opener to the Eliminator 8 round in the Chase for the NASCAR Sprint Cup.

For Gordon, it was his ninth win at the .526-mile track and 93rd victory in the NASCAR Sprint Cup Series. With his first win of the 2015 season, Gordon advanced to the Championship 4 in three weeks at Homestead-Miami Speedway!

This week we have three players who have joined this fraternal order.  Cole The On Demand Baseball Player, A&M Aggies Sue, and Leon Your Most Humble Sheriff all did their homework and reviewed the stats pages enough to realize that Mr. Four-Time, Jeff Gordon, would not me denied a win at Martinsville today.  Gordon’s very sentimental win gave these three players top points for the week, 47 big ones.

This race track is intertwined with Hendrick Motorsports, with many highs and one extremely low!

The second highest scorers this week are Edie The Las Vegas Super Star and Lonna The Quilt Angel.  Each lady selected Denny Hamlin as their choice to win the Martinsville race. Even though Hamlin did not win,he did finish third and that rewarded those two ladies with 42 points.

There was a group of six players who grabbed 39 points for their Martinsville tally.  Four of the players, Linda The Cookie Mom, Bernie The Bay Area Bandit and Password Queen, Jeremy The Coach, and David The Mudslinging Throttle Jockey had chosen Kurt Busch, formally known as The Outlaw, to win the race.  Additionally, Dan The Numbers Cruncher and Doug, Jr. The Crown Prince of Kettle Corn selected Martin Truex, Jr. as their winner.  Neither of those drivers won the race, however, both drivers rewarded their players with a nifty 39 points.

Meanwhile, both Carole NN (No Nickname) and Jason The Latent Tie Dye Hippie and All-Around Edgy Dude thought that Jimmie Johnson would play the role of The Chase Spoiler and win the race.  Mr. Six-Pack did not win but he did finish 12th and that was enough give these two players 32 points.

Rounding out the top five scorers of the week is Zee NN (No Nickname), grabbing 30 points from Cousin Carl Edwards’ 14th place finish.

Once again there was a wide amount of movement in the standings this week.  There were only six players who maintained their last week’s position.  The top four on the pylon, A&M Aggie Sue, Edie The Las Vegas Super Star, Cole The On Demand Basebalol Player, and Jason The Latent Tie Dye Hippie and All-Aropund Edgy Dude all held serve on their positions. Likewise, Carole NN (No Nickname) and Doug, Jr. The Crown Prince of Kettle Corn also reamained in their previous spot.

Both Carlton The Doorman, and Doug The Former Mudslinger and Psychic, Turned Kettle Corn Dude took a fairly big hit at Martinsville, falling six (6) places in the standings.

Falling almost as many place was Marc NN (No Nickname).  Marc slipped five (5) positions after the Martinsville race.

Jeremy The Coach, Bernie The Bay Area Bandit, Linda The Cookie Mom, Jim, aka Chiefy, Dan The Numbers Dude, and Leon Your Most Humble Sheriff all climbed up the scoring pylon three (3) spots.  However, Jerry The Buschwacker plummeted three (3) positions this week.

Both David The Mudslinging Throttle Jockey and Zee NN (No Nickname) moved up two places, while Brandon and Karen The Highly Opinionated Southen Belle slid down in the standings by two places.

And that leaves Lonna The Quilt Angel and Dawn NN (No Nickname) stepping up one place each this week.

As I keep mentioning weekly, if you score a single digit for your race tally, you are destined to be the winner of the crappiest pick of the week award.  This week that statement rings true again!  Doug The Former Mudslinger and Psychic, Turned Kettle Corn Dude was one of two players that managed to score single digts this week.  The Kettle Corn Dude was only able to gather six microscopic points, and overwhelmingly wins this week’s Crappiest Pick Of The Week award!

Continuing with the single digit thought, Jerry Buschwacker was the other single digit player, scoring just nine (9) points.  Those nine points was enough to allow The Buschwacker to slither down, and into The Outhouse this week, ousting Dawn NN!!

Next week the NASCAR circus rolls into Fort Worth, Texas, at  the Texas Motor Speedway!