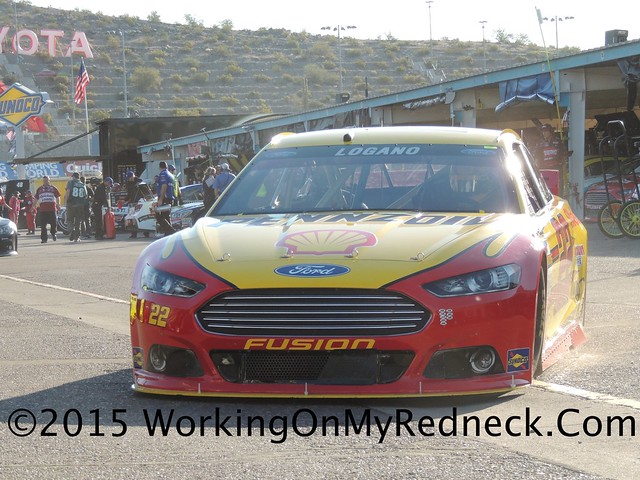 It just seems like The Redneck Fantasy League just can’t get enough of Joey Logano!  He has been in the limelight continuously for the last month, winning three races in a row, and being in the lead, and apparently running away with the race at Martinsville, until Matt Kenseth extracted his “pound of flesh” from Logano by impaling both his car and Logano’s into the retaining wall.

That bold action by Kenseth was described quite well in Newton’s Law of Physics! It could be one of two corollaries (an immediate consequence or easily drawn conclusion), a body that is in motion stays in motion, or for every action there is an equal and opposite reaction!

Nevertheless, the fact that Logano was not able to drive his race car into the hauler has not stopped this group of venturous souls from putting all their marbles into Logano’s bag this week.  Those willing to take another chance with Logano this week include our points leader A&M Aggie Sue, as well as Doug The Former Mudslinger and Psychic, Turned Kettle Corn Dude, Doug, Jr. the Crown Prince of Kettle Corn, Marc NN (No Nickname and his Wonder Dog Onyx), and Leon The Retired Airline Captain, Part-Time Cardiologist and Strawberry Picker, and Your Most Humble Sheriff.

Additionally, there is a gaggle of drivers, five to be specific, that have a gallery of two players hanging tough with them this week.

Even though Jimmie Johnson has been dispatched out of The Chase both Cole The On Demand Baseball Player and Karen The Highly Opinionated Southern Belle would love to see him drive his car into the victory celebration Sunday.

Both Brandon NN (No Nickname) and David The Mudslinging Throttle Jockey would love to see Matt Kenseth, if he is not suspended for two races, climb out of his car for the victory celebration.

For Jim, aka Chiefy and Jason The Latent Tie Dye Hippie and All-Around Edgy Dude their joy button would be pushed if Kurt Busch, formally known as The Outlaw, would cruise on into Victory Lane at Texas.

There are two more players that must really dig bad boys, as well.  Both Linda The Cookie Mom and Jeremy The Coach will be rooting for Blazingly Bad Brad Keselowski.  And I might add that they are hoping that Kes is not on the receiving end of any ill actions by the other 42 drivers who have expressed marginal love for Bad Brad throughout his career!

If you were counting, that leaves seven players who are in bidnez for themselves this week!

One piece of advice that I would give to Kenseth and Logano let there be “Peace In Our Tme”!

Good luck to all this week at Texas!