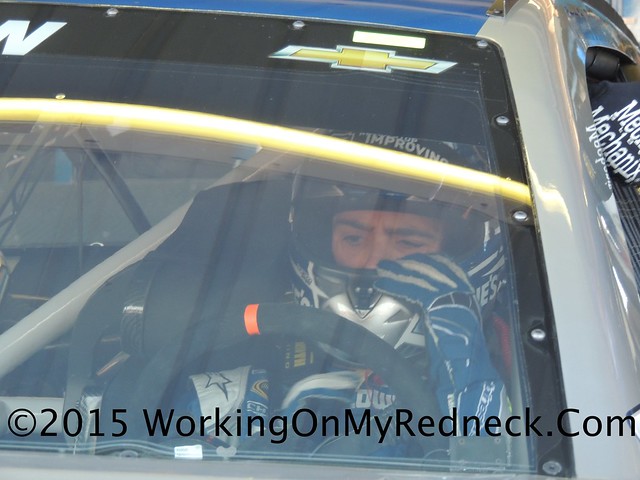 Johnson led just six laps but denied the eight remaining contenders in the Chase for the NASCAR Sprint Cup playoffs an automatic berth among the championship-eligible quartet. His fifth win of the season was his sixth at the 1.5-mile Fort Worth track and the 75th of his premier-series career.

We have a new leader atop of the leaderboard after the race at Texas, Cole The On Demand Baseball Player.  With A&M Aggie Sue’s tumble from the top posittion this week with a score of 4 points, the door was opened, and the position was filled by Cole!

This week there were three players who were fortunate enough to have selected Mr. Six-Time, Jimmie Johnson to win the race..  Those three players are Karen The Highly Opinionated Southern Belle, Cole The On Demand Baseball Player, and finally Dan The Numbers Cruncher.  These three rallied to score the maximum points today, 47 big ones!

Two players, Linda The Cookie Mom and Jeremy The Coach had victory snatched from their grasp in the final six laps.  Both players had been laughing, joking, and frolicing, thinking that they had this victory in the bag for the entire race.  For over 312 laps nobody had anything for their man, Blazingly Bad Brad…... until Jimmie Johnson arrived on the scene! Nevertheless, these two players racked up a cool 44 points.

Carlton The Doorman, Lonna the Quilt Angel, and Bernie The Bay Area Bandit and Password Queen had their ups and downs while rooting for Kevin Harvick at Texas,  On two different occasions Harvick had to pit early.  The first time was from a blown left rear tire early on in the race, and the second was also for another tire problem.  But through it all Harvick provided them 42 points for the race.

This week Jerry The Buschwacker was, in fact, “buschwacking” with “the Shrub”, Kyle Busch.  He was able to add to his totals 41 points for this segment.

Rounding out the top five scorers this week is Dawn NN (No Nickname) who racked up a nice 39 points coming from Carl Edwards.

Three quarters of the players moved around the totem pole this week.  The biggest mover is Carole sliding down the bannister five (5) spots to land in 21st place.

Moving almost as many spots, four (4), but in the upward direction is Dawn NN (No Nickname).  Dawn moved from the 21st place, just outside of The Outhouse, to land in 22nd place.

Jerry The Buschwacker and Lonna The Quilt Angel rose up from the ashes to position themselves in 19th and 14th, respectively.  Meanwhile, A&M Aggie Sue and Brandon each slipped three (3) spots this week.

Both Linda The Cookie Mom and Dan The Numbers Dude climbed up two (2) positions, while Marc, Doug The Former Mudslinger and Psychic, Turned Kettle Corn Dude, and Doug, Jr. The Crown Prince of Kettle Corn dropped two (2) spots this week.

This week the undeniable winner of The Crappiest Pick of The Week goes to Carole.  Her choice of Tony Stewart garnered her a microscopic two (2) points, the least points logged at Texas.

The other news from this department is that we have a brand new Ogre of The Outhouse, a new winner of the weekly Outhouse Award.  This week Doug, Jr. The Crown Prince of Kettle Corn is now in control by a narrow margin of four (4) points!

The season is rapidly coming to a halt.  Next week NASCAR, Jim, aka Chiefy, and yours truly, will be at the Phoenix International Raceway for the penultimate race of 2015!

Good luck to all and look for me along the pit wall capturing photos of the race for our fantasy league.

The bottom four drivers in The Chase standings will be going to PIR this week “living on a prayer”!