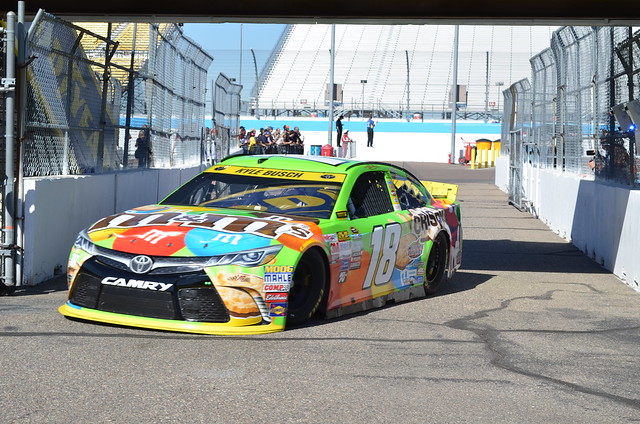 If there has ever been a question about there being a Santa Clause, a Tooth Fairy, or a Guardian Angel, after the checkered flag at Homestead tonight that should all be put to rest!  Kyle Busch has proven that they all exist and they were all buckled in and were riding in the copilot’s seat with KyBu in the final 10 laps Sunday at Homestead!  The Monday morning headlines will read that Kyle Busch is the 2015 Sprint Cup Champion.

However, that is only scratching the surface of one of the most remarkable comeback stories I can recall.  To endure the catastrophic injuries of a compound fracture of the right leg and also a broken left foot, to get back into a race car 12 weeks later and win four races, to gather enough points to qualify for The Chase, then win the race at Homestead and ultimately the Sprint Cup championship is quite unbelieveable!  But that is just what Kyle Busch did!

Zee was the only player who selected KyBu as the race winner this week, and for that she received 43 points.

Edie The Las Vegas Super Star did not pick the winner, however, she did pick “Blazingly Bad” Brad Keselowski and did receive 43 points for his third place finish.

Both Linda The Cookie Mom and Carlton The Doorman logged a cool 38 points from Jeff Gordon’s 6th place finish.

There were four players who were able to put up 34 points into their total column after Homestead.  Three of those players, Doug, Jr. The Crown Prince of Kettle Corn, Jason The Latent Tie Dye Hippie and All Around Edgy Dude, and Leon Your Most Humble Sheriff grabbed their tally from Denny Hamlin’s 10th place finish.  While Doug The Former Mudslinger and Psychic, Turned Kettle Corn Dude received his points from Carl Edwards’ 11th place finish.

Rounding out the top five scorers in the final race of the year is A&M Aggie Sue getting 32 points from Martin Truex,Jr’s 12th place finish.

In this the last race of the season, our biggest movers was Marc NN (No Nickname)  and Jerry The Buschwacker.  Marc climbed out of the bowels of the standings to land in 16th place, whereas Jerry The Buswchwacker plummetted four spots to finish the season in 21st place.

Linda The Cookie Mom, Doug The Former Mudslinger and Psychic, Turned Kettle Corn Dude, and Leon Your Most Humble Sheriff all climbed up three spots this week.  Conversely, David The Mudslinging Throttle Jockey and Dawn, aka Snoopy, slipped down three places as the checkered flag flew at Homestead.

Finally Dan The Numbers Dude, Brandon NN (No nickname), and Carole NN (No Nickname) all slipped two spots, however, Doug,Jr. The Crown Prince of Kettle Corn stepped up two positions.

There is a tie this week for the Crappiest PIck of The Week.  That honor is shared between Dawn, aka Snoopy, and David The Mudslinging Throttle Jockey, both had selected Clint Bowyer as their race winner today, and scored a whopping 1 point!

Lastly we must celebrate our 2015 third segment Outhouse Award winner. With the microscopic score of one point today, Dawn, aka Snoopy grabs that award away from her closest competitor, Jerry The Buschwacker!

It is just 90 days to go till we start all this fun again for 2016!  I hope that you all had fun this year participating in The Redneck Fantasy League.

Have a great Thanksgiving, a Merry Christmas, and a very safe, sane and Happy New Year!