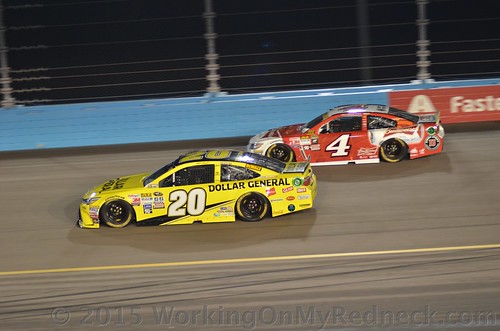 In less than one month, Feb 21st to be exact, the Sprint Cup teams will be thundering around the Daytona International Speedway in the Daytona 500!

On my last check, it appears that 1/3 of the players have uploaded their picks.  I like that progress!  But we all do know who the procrastinators are each segment. Nevertheless race fans, racing season is getting closer by the day.

With the Daytona 500 less than thirty days away every single race team is anxious, excited, and they all have an equal chance of winning that coveted Sprint Cup championship, at least on paper that is.

So who you think will be standing on the podium in November at Homestead?  Could Kyle Busch repeat as the Sprint Cup champion? Could Kevin Harvick correct a couple of bad finishes to be a two-time champion? Maybe Jimmie Johnson may have another run for the championship left up his sleeve?  Could the most popular driver in NASCAR for more than the last decade, Dale Earnhardt, Jr., pull off his very first championship?

What race team do you think has positioned themselves for a successful run at the 2016 Sprint Cup championship?

Can Joe Gibbs Racing repeat in 2016?  If so, which driver in their stable is positioned to be the 2016 Sprint Cup champ?  Could “The Shrub” repeat? Maybe Matt Kenseth could grab his second championship?  Maybe “Cousin Carl” Edwards could be ready to close the deal?  If Denny Hamlin gets his ACL healed up, he may be ready to make another run at Homestead?

Do you think that Hendrick Motorsports could be celebrating at Homestead? Which of those drivers may be ready to hoist the Sprint Cup, Junior, Jimmie Johnson, Kasey Kahne, or the new kid on the block, William Clyde Elliott, Jr., aka Chase Elliott?

Could Roush Fenway Racing be positioning itself to regain some of it’s lost luster? Is “The Biff” over the hill?  In fact, does FRF have any driver in their stable that could make a run at the championship?  Or again, is RFR “rebuilding” with their youngsters of Ricky Stenhouse, Jr., Trevor Bayne?

How about the two drivers at Team Penske?  Can “Blazingly Bad” Brad Keselowski pull another championship out of his hat?  More importantly, can “Sliced Bread”, Joey Logano, live up to his name and reel off his first Sprint Cup championship?

The drivers over at Stewart Haas Racing might have something for everyone, who knows.  Kevin Harvick sure held his own last year.  With the exception of a couple of races, he could have repeated as Sprint Cup champ!  Kurt Busch showed everyone that he is resilient and can overcome some of his self made obstacles to win races. However, the other two drivers in the SHR house would be a stretch to include them in championship talks. (Please no hate mail!!!)

I am not so sure that there is anyone at Richard Childress Racing that could mount a serious charge to the top of the totem pole in 2016.  Ryan Newman has been in The Chase the last two years, however, he did not seriously pose a huge threat to win it. Both Austin Dillon and Paul Menard are in the same boat, in that they have not shown that they can close the deal yet!

Could a single car team, ie, Furniture Row Racing and Martin Truex, Jr., be the dark horse that could totally surprise the big three and break through this year?

So race fans the Daytona 500 is rapidly approaching us, and as the late great Glenn Lewis Frey so elegantly wrote and sang, “Take It Easy”!