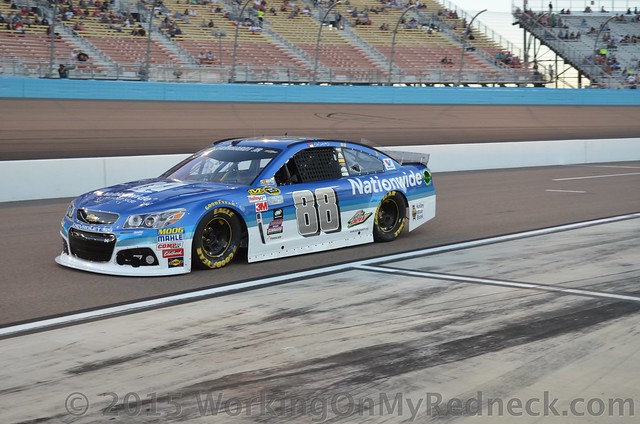 Well by the time you all read this, my first post of the 2016 season, two of the Hammack boys (Jim,aka, Chiefy and Leon Your Most Humble Sheriff) will be on a plane to Orlando for the 2016 Daytona 500!  More than likely this will be our last trip to Daytona, but at least we will get to see the whole new “Daytona Rising” project in it’s finished state.

Now on to the more important stuff for the first race of this segment.

As you may have gleened from the accompanying photo, a majority of the players are going with the favorite, betting the farm, and or just trying to start off this segment with some big points!  This week there are seven players, one third of the total, riding shotgun with the pied piper of the plate tracks, Dale Earnhardt, Jr., and hoping that he can get his third Daytona 500 win!

Those seven players that are applying for Junior Nation memebership this week are Zee NN (No Nickname), Carole, aka Rudy, Bernie The Bay Area Bandit and Password Queen, Marc NN (No Nickname), Jason the Latent Tie dye Hippie and All Around Edgy Dude, and of course Leon Your Most Humble Sheriff.

The second most popular driver this week is Matt Kenseth.  The players that are giving Kenseth some love this week are Jim, aka Chiefy, his compadre in crime Edie The Las Vegas Super Star, A&M Aggie Sue, and our newest player Bobby, aka Blue Crush!

We have two drivers that have two players each that will be riding shotgun with them on the high banks of Daytona.  Linda the Cookie Mom and Jerry The Buschwacker are using up their Kasey Kahne pick first at Daytona.

The defending Sprint Cup champ, Kyle Busch, has both Dan The Numbers Cruncher and Carlton The Doorman in his hip pocket for Daytona.

That leaves six players who may think that they are individual thinkers, but we all know that they are really just in bidnez for themselves at Daytona!

So is your “driver bringing this circus to town”?