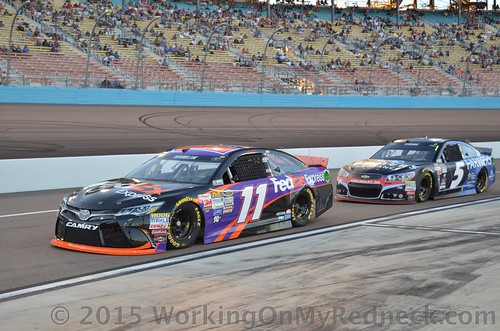 Denny Hamlin earned his first Daytona 500 victory in the closest finish in the race’s storied 58-year history, pushing his No. 11 FedEx Toyota ahead of Martin Truex Jr.’s Toyota at the finish line by one-hundredth of a second (0.010) — a half-foot winning difference in NASCAR’s most celebrated event.

The two cars crossed the finish line simultaneously, and it wasn’t until NASCAR made the official call and television replayed the finish before most people — in the pits and the grandstands — were certain who had won.

The only player who selected the Daytona 500 winner, Denny Hamlin, was Dawn, aka Snoopy!  For her great prognostication she grabs a very cool 45 points. (Remember this year that the top score for a win is 40 points, plus 1 point for leading a lap, plus an additional lap for leading the most laps, and then 3 points for winning the race!)

One more memory jogging note, the last time that Snoopy started off the season by selecting the Daytona 500 winner she put an old fashion blue collar butt whoppin’ on all of us for the entire year!

If it was not bad enough that Dawn, aka, Snoopy picked the winner, her other half, Carlton The Doorman, racked up a nifty 39 points from his selection of ol Kylie Busch, who finished 3rd Sunday.

Rounding out the top five this week would be Karen The Highly Opinionated Southern Belle after scoring 35 points from one of her most favorite drivers, Joey Logano, who was able to salvage a sixth place finish!

This week we have an eight way tie for the crappiest pick of the week. Additionally, since this is the first race of the segment those eight players are all tied for control of the throne.  That means that all eight players, Marc NN (No Nickname), Jason The Latent Tie Dye Hippie and All Around Edgy Dude, Bernie The Bay Area Bandit and Passward Queen, David The Mudslinging Throttle Jockey, Carole, aka Rudy, Zee NN (No Nickname), and Leon The Retired Airline Pilot, Part-Time Cardiologist and Strawberry Picker, Former Elephant Driver and Your Most Humble Sheriff were only able to secure 6 points from Dale Earnhardt, Jr.’s bad day at Daytona and are all co-winners of this week’s Outhouse Award!

For those of us who are crowded into The Outhouse, I am sure that we all will hoping that our picks at Atlanta will do much better even though we are joining each other this week singing a verse or two of ‘Don’t Let Me Down”!

Next week the traveling circus known as NASCAR will take all three series to the Atlanta Motor Speedway, in Hampton, GA, for another weekend of thrills and excitement.

Good luck to all!!