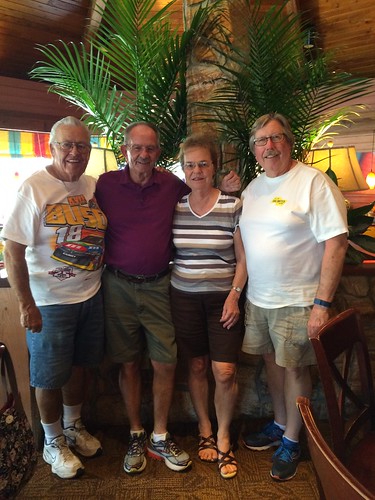 Earlier this week the insider information investigation proceeded with a private meeting between The Redneck Fantasy League Sheriff and his counsel, Jim, aka Chiefy and Dawn, aka Snoopy, and her legal counsel Carlton The Doorman.

After many conversations via encrypted cell phones over the Daytona 500 weekend a time and place was negotiated that was agreed upon by both sides for this investigation.  It was agreed that there would be a meeting at a place that was deemed to be a non threatening mutual turf venue, the Bahama Breeze restaurant near the Altamont Springs Mall in Altamont Springs, FL.

After some discussion between the parties regarding the ground rules of this meeting, and prior to any discussions, lunch was served.

After some positioning, postering and bravado between the two legal counsels, Chiefy and The Doorman, regarding the actual questions and topics that would be covered in this meeting the deposition began.

For more than two hours there was bantering back and forth between the sides. There were in depth questions posed to Snoopy delving into what she knew, when she knew it, and who gave her that information regarding the performance of certain Sprint Cup race teams back in 2014, when she won the Championship and gave everyone a thorough butt whipping. In light of her recent surge to the top of the leaderboard after the Daytona 500, it was quite obvious that once again she is privy to some inside information!

There were many objections raised by he counsel, The Doorman, side bars between both counsels. The Doorman and Chiefy, as well as conferences between Your Most Humble Sheriff and Chiefy.

After many probing questions by Your Most Humble Sheriff and some damning photos from The Redneck Fantasy League PI, Snoopy was steadfast with her very evasive answers!  On the advice of her counsel, The Doorman, she refused to give up or roll over on any of her sources, and on several occasions she stood firmly on the 5th!

When the meeting was concluded it was the opinion of Your Most Humble Sheriff that there is more to this than meets the eye!  With that in mind, I advised both Snoopy and her counsel, The Doorman, that she will continue to be under the microscope, and that this is not the end of this investigation!

Snoopy, Somebody will be watching you!