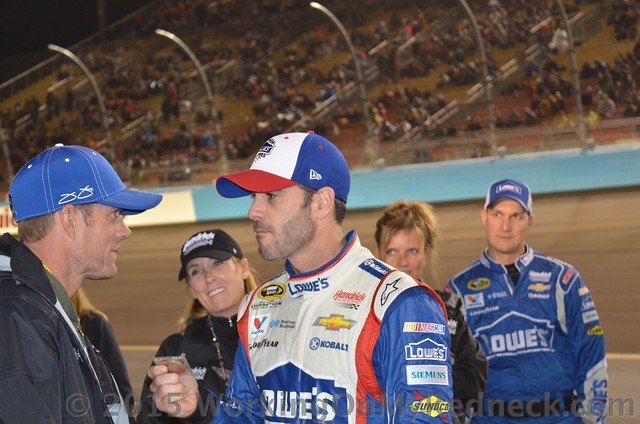 It was déjà vu at Atlanta Motor Speedway on Sunday, as Jimmie Johnson and Kevin Harvick — last season’s 1-2 Atlanta finishers — battled in the final 40 laps of the Sprint Cup Series’ Folds of Honor QuikTrip 500. Although Harvick chipped away at the lead, Johnson seemed primed for the win — but then Ryan Newman’s smoking No. 31 brought out the caution with three laps to go.

Both Johnson and Harvick took four tires and had identical 11.1-second pit stops, emerging from pit road first and second, respectively, for the final restart. When the green flag waved, Johnson shot out front while Harvick spun his tires and fell back. A last-lap crash took out several cars, as Johnson held on to earn his 76th Sprint CupSeries win. The victory ties Johnson with Dale Earnhardt, Sr. in NASCAR premier series wins.

There were four players this week who successfully selected the race winner, Jimmie Johnson, and joins this week’s Fraternal Order of The Go Fast.  Those four players are last week’s winner, Dawn, aka Snoopy, Jason The Latent Tie Dye Hippie and All Around Edgy Dude, Lonna The Quilt Angel, and Leon The Retired Airline Captain, Part-Timer Cardiologist and Strawberry Picker, as well as Your Most Humble Sheriff.

The second highest scorers this week were Cole The On Demand Baseball Player and A&M Aggie Sue.  Even though they selected different drivers, Sue picked Dale Earnhardt, Jr. and Cole selected Ky Busch, both drivers scored a total of 39 points at Atlanta.

There were five players who ranked third on the scoring list after Atlanta. Those five are Karen the Highly Opinionated Southern Belle, Carole, aka Rudy, Jim, aka Chiefy, Doug The Former Mudslinger and Psychic, turned Kettle Corn Dude, Jerry The Buschwacker, and Dan The Numbers Cruncher and all logged a cool 37 points this week.

Sitting fourth on this week’s scorers is Kilimanjaro Bobby, aka Blue Crush, who was awarded 32 points from Keselowski’s ninth place finish.

And round out the top five scorers of the week is Jeremy The Coach who racked up 29 points from Joey Logano’s twelfth place finish.

Being just the second race of the segment the movement was widespread but very small in nature.  However, the single largest mover of the week was Cole The On Demand Baseball Player rocketing up five (5) places out of the intensely crowded Outhouse to land in 16th place.

Second on the movers list would be Bernie The Bay Area Bandit and Password Queen, plummeting four (4) spots to be the co-inhabiter of The Outhouse this week! Joining The Password Queen in the plummeting ride is Jeremy The Coach, who also fell four spots and now rests in 8th place. Conversely, Lonna the Quilt Angel climbed up four spots to rest now in the third spot  on the totem pole this week.

Both Carlton The Doorman and Marc NN (No Nickname) fell three spots in the standings this week to land in 6th and 17th, respectively.

Meanwhile the All Around Edgy Dude very quietly stepped up two positions on the leaderboard after Atlanta.

With the exception of Dawn, aka Snoopy, Dan the Numbers Dude, Jim, aka Chiefy, Kilimanjaro Bobby, Linda The Cookie Mom, Carole, aka Rudy, and David The Mudslinging Throttle Jockey, who all remained in the previous positions, the remaining un-named players moved one place either up or down this week.

The Crappiest Picks of The Week

This week we have a tie for this award!  Zee, aka Sissy and Bernie The Bay Area Bandit and Password Queen both only garnered 6 microscopic points from their choice of Clint Bowyer.

Additionally, since these like minded ladies each scored six points, that marginal pick allowed them both to land in The Outhouse this week!  As I look at the scores both Sissy and the Bay Area Bandit have a knack for getting 6 points for each of the two races this week.

As the Sun sets on Hampton, GA, it is time to turn the lights out in Georgia!

Next week it is time to head out West to the Las Vegas Motor Speedway for both NASCAR and Your Most Humble Sheriff!

TIL NEXT TIME, PULLL YOIUR GLOVES UP, FLIP YOUR VISOR DOWN, AND LET’S GO RACIN’!