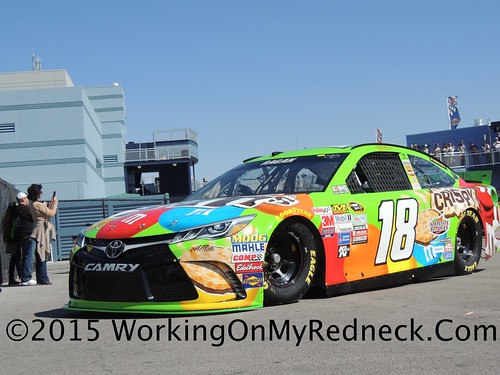 For the next three weekends NASCAR making it’s presence known and is invading the West Coast tracks of Las Vegas, Phoenix and Fontana.  By the time that most of you read this post I will be well on my way to Las Vegas Motor Speedway in my motorhome for the NASCAR weekend.

Was the lead in photo a dead give away?  It would appear that nearly half of the the Redneck Fantasy League, eight players in total, are rallying around the M&M’s flag pole for Kyle Busch.  I am not really sure if these eight players, Karen The Highly Opinionated Southern Belle, Zee, aka Sissy, Carole, aka Rudy, Jim, aka Chiefy, Edie The Las Vegas Super Star, Linda The Cookie Mom, Bobby, aka Blue Crush, and Jeremy the Coach are all really rooting for ol Kylie–or if they are just heavily addicted to sugar and M&M’s!

The next most popular driver this week is the older Bush brother, formally know as The Outlaw, Kurt.  In Kurt’s corner this weekend is David The Mudslinging Throttle Jockey, Doug The Former Mudslinger and Psychic, Turned Kettle corn Dude and lastly, A&M Aggie Sue.

Next up on terms of popularity for this week’s race is a tie among three drivers, Jimmie Johnson, Matt Kenseth and Brad Keselowski.  Last week’s race winner, Johnson, has in corner this week, Marc NN (No Nickname) and Cole The On Demand Baseball Player.

Riding shotgun with Matt Kenseth Sunday will be Jerry The Buschwacker and Lonna The Quilt Angel.

Lastly, “Blazing Bad” Brad Keselowski will have the father and son duo of Leon Your Most Humble Sheriff and Jason The Latent Tie Dye Hippie and All Around Edgy Dude!

Counting the numbers, and doing some math in public, that would leave four players who may be counting themselves as “politically independent”!  Well we all know that quite literally this week they are in bidnez for themselves!

Good luck to all in Sin City!