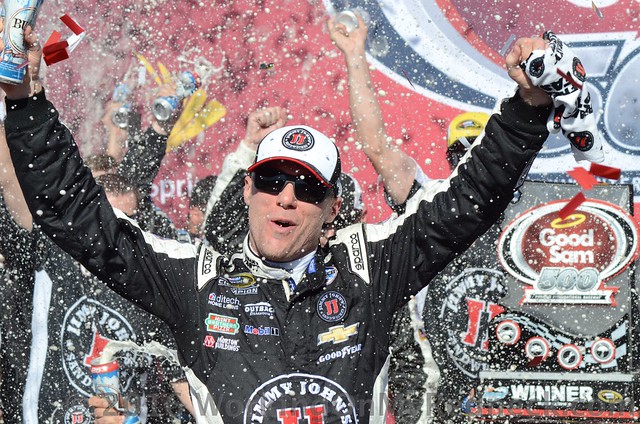 In recent years, Kevin Harvick has exercised his dominance at Phoenix International Raceway by crushing the competition.

In Sunday’s Good Sam 500 at the one-mile track in the Sonoran Desert, he maintained his mastery by a matter of inches, banging fenders with Carl Edwards in a side-by side overtime battle on the way to the finish line.

After the drivers traded shots on the way to the stripe, Harvick pulled ahead to win the fourth NASCAR Sprint Cup Series race of the season by .010 seconds (roughly four inches), the identical margin by which Denny Hamlin had beaten Martin Truex Jr. in the season-opening Daytona 500.

There were five players who joined The Fraternal Order of The Go Fast this week. Jason The Latent Tie Dye Hippie and All Around Edgy Dude, Jerry The Buschwacker, Jim, aka Chiefy, Lonna The Quilt Angel, and Leon Your Most Humble Sheriff all had the foresight to select “Kactus Kevin” Harvick, the winningest driver in Phoenix history, as their driver Sunday and was rewarded with 45 points.

The father and son duo of Jeremy The Coach and Cole The On Demand Baseball Player both selected Carl Edwards and received 40 points for Edwards’ second place finish.

Meanwhile both Marc NN (No Nick Name) and David The Mudslinging Throttle Jockey had Saturday’s XFINITY winner, Kyle Busch as their man. for Kyle’s fourth place finish.  Both picked up a nifty 38 points for their effort.

Rounding out the top five scorers of the week would be Doug The Former Mudslinger and Psychic, Turned Kettle Corn Dude who added 34 points to his segment totals.

There was, once agin, wide spread movement, with 16 players changing places after the Phoenix race! The largest position change this week belongs to A&M Aggie Sue, who plummeted nine positions to land this week in 17th place.

The second biggest movers this week would be Jim, aka Chiefy, Leon Your Most Humble Sheriff, Jason The Latent Tie Dye Hippie and All Around Edgy Dude and Karen The Highly Opinionated Southern Belle. The Highly Opinionated One dropped like a prom dress, falling six places this week residing now in 8th place. Whereas Chiefy, The Sheriff and The All Around Edgy Dude all climbed up six spots landing in 1st, 6th, and 7th places respectively.

Both Linda The Cookie Mom and Dan the Numbers Cruncher slid five spots this week to land in 10th and 15th places respectively.

Jeremy The Coach bettered his previous spot by moving up four places  to now reside in second place.

And rounding out the top five movers would be Dawn, aka Snoopy.  This week she finally fell out of the lead and landed in 4th spot.

This week the award for “The Crappiest Pick of The Week” goes to A&M Aggie Sue who scored only 12 points from “Blazingly Bad” Brad Keselowski. For the second week in a row Bernie The Bay Area Bandit and Password Queen resides in full control of The Outhouse.  Although Zee, aka Sissy is making a very strong run to try to oust her out of The Outhouse!

Next week NASCAR continues with it’s Westward Swing and will be racing in Fontana,CA.