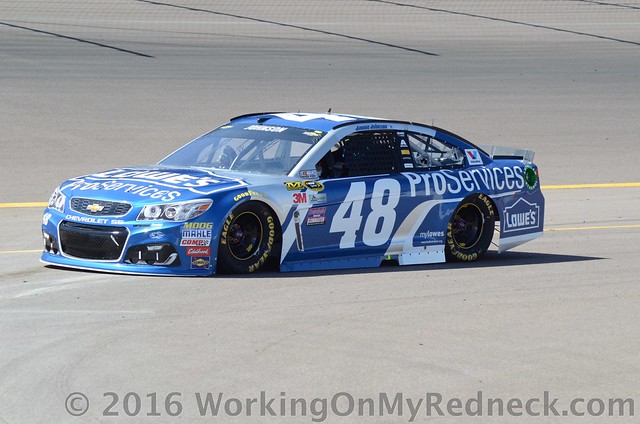 As NASCAR heads towards it’s last stop on the Sprint Cup Western Swing at the Auto club Speedway in Fontana, CA, it appears that the consensus of The Redneck Fantasy League is for Mr Six-Pack, Jimmie Johnson this week.

The week Karen The highly Opinionated Southern Belle, Bobby, aka Blue Crush, Bernie The Bay Area Bandit, as well as Jeremy The Coach all will be shoe-horned into the copilot’s seat of the HMS No. 48 Lowe’s Chevy this weekend. It may be very uncomfortable and extremely cramped inside the cockpit of Jimmie Johnson’s race car Sunday!

Meanwhile, Joey Logano has a contingency of three players in his rooting section. Those three players rooting for Logano are Dawn, aka, Snoopy, Edie The Las Vegas Super Star and A&M Aggie Sue.

This week Kurt Busch, the driver formally known before his brush with the Delaware family courts as Outlaw, has  Lonna The Quilt Angel, Dan The Numbers Cruncher and Jason The Latent Tie Dye Hippie and All Around Edgy Dude.  All three are betting the farm that KuBu can lead the field to the checkered flag Sunday.

Now, what we have left is there are four drivers that has two players each rooting for them.

Both Zee, aka Sissy and David the Mudslinging Throttle Jockey are thinking that “Young Money”, Kyle Larson, will break out and win his very first Sprint Cup race this Sunday.

Likewise, Jim, aka Chiefy and Carole, aka Rudy, think that “Blazingly Bad” Brad Keselowski can pull off the victory at Fontana Sunday.

Lastly, Linda The Cookie Mom and Cole the On Demand Baseball Player are putting all their marbles in the marble sack of Matt Kenseth this week!

That leaves three players who fall into the category of free thinkers.  But what that really means is that they are in bidnez for themselves this week!

Good luck to all as the race teams get onboard a “westbound 747”!