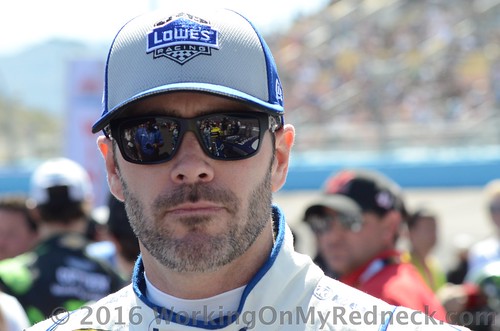 You don’t tug on superman’s cape
You don’t spit into the wind
You don’t pull the mask off that old lone ranger
And you don’t mess around with Jim, (Jimmie Johnson that is)!

That old Jim Croce song went through my head as Jimmie Johnson and his Superman paint scheme Chevy aced out Kevin Harvick on the overtime restart at Auto Club 400 Sunday for his second victory of the 2016 season!

There were four players who belong to this auspicious order this week. Leading the pack is Karen The Highly Opinionated Southern Bell, Kilimanjaro Bobby, Bernie The Bay Area Bandit and Password Queen, and rounding out that group is our new leader, Jeremy the Coach!  This foursome received 44 points for Jimmie Johnson’s victory.

It is amazing just how mediocre we all performed outside of those top four scorers that rode shotgun with Jimmie Johnson!

The second highest scorers of the week are Dawn, aka Snoopy, Edie The Las Vegas Super Star and A&M Aggie Sue all grabbing 38 points from Joey Logano’s 4th place finish at Fontana.

Both Carole, aka Rudy and Jim, aka Chiefy were rooting for “Blazingly Bad” Brad Keselowski and logged a nice 32 points for his 9th place finish.

There were three players that tipped the scales with large scale movement. Both Karen The Highly Opinionated Southern Belle and A&M Aggie Sue soared up the leaderboard six spots landing in 2nd and in a three-way tie for 8th place, respectively.  Whereas Dan The Numbers Cruncher dropped like a hot potato and landed in 16th place this week.

Rounding out the top fiver movers is Jim, aka Chiefy who slid down two places this week.

It was an easy choice to find the player with “the crappiest pick of the week”! Again this week we have a tie for this award between Zee, aka Sissy and David The Mudslinging Throttle Jockey.  Both of these players were rooting for Kyle Larson who unfortunately took a nasty hit early in the race and only produced 2 points for these two!

We have a “Princess of the Poophouse”, a new winner of The Outhouse Award this week.  The new occupant this week is Zee, aka Sissy!

So as the Sun sets over the last stop of NASCAR’s Western Swing in the greater LA area, the haulers head East and are on their way back to Charlotte for a much deserved week off next weekend.  I am sure that many of the crewmembers are still mesmerized from their week in LA, the beaches, and all the Hollywood aura that fills the air in the greater LA basin.