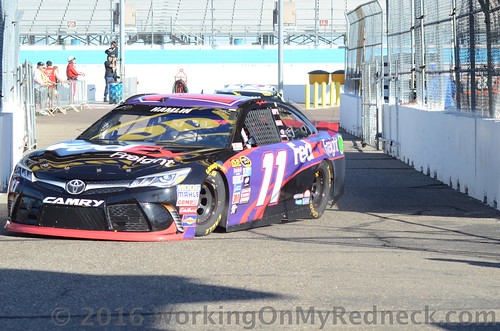 After a week off from the rigors of the weekly NASCAR traveling grind the show moves into Martinsville, VA, the smallest and slowest race track on the circuit.  I am sure that the drivers and the rest of the race team was happy to have the week off, but it is now time to get back after it!

Let’s look quickly look at the leaderboard, as far as the standings go we are approaching the halfway mark of segment number one and the leaderboard has pockets of crowdedness.

To prove my point, positions one through six is just separated by just 11 points!  For positions 8 through 16 there is just a 12 points spread among those players!

This week one third of The Redneck Fantasy League, seven players, are onboard with the 2016 Daytona 500 winner, Denny Hamlin.  Those seven players are  Karen The Highly Opinionated Southern Belle, Jim, aka Chiefy, Edie The Las Vegas Super Star, Cole The On Demand Baseball Player, Jerry The Buschwacker, Jason the Latent Tie Dye Hippie, All Around Edgy Dude, and Wild Child, as well as Leon Your Most Humble Sheriff.

There are three players, Lonna the Quilt Angel, Jeremy The Coach, and A&M Aggie Sue, this week that are rooting for “Young Money”, Kyle Larson.

Additionally, there are three drivers this week that have two players each hoping that their driver will drive into Victory Lane.

First among those drivers with two rooters is Kyle Busch.  The players that are in KyBu’s camp are Dawn, aka Snoopy and Bernie The Bay Area Bandit and Password Queen.

Those two players that are in the Matt Kenseth’s corner this week are Dan The Numbers Cruncher and Marc NN (No Nickname).

Lastly Carton The Doorman and Linda The Cookie Mom are hanging tough with Dale Earnhardt, Jr. this Sunday.

For all you math majors who has just run the numbers, that leaves five players who would like to think of themselves as independent thinkers, however, we all know that they are really in bidnez for themselves!

Good luck to all this weekend.  It is time to get back into the swing of things and a little of those “working man’s blues”!