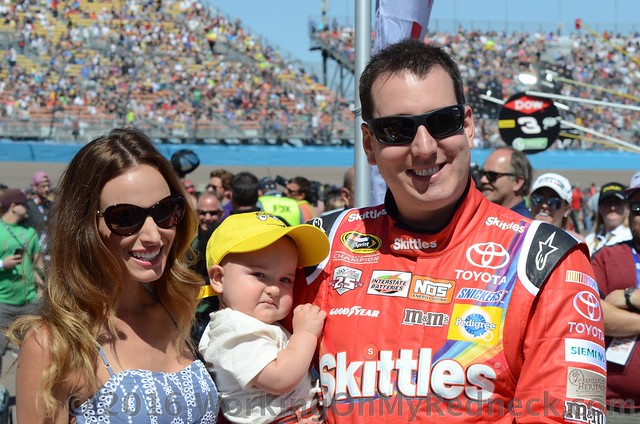 Kyle Busch topped the field in Sunday’s Sprint Cup Series STP 500 race at Martinsville Speedway, leading 352 laps out of 500 to land the No.18 Joe Gibbs Racing Toyota in Victory Lane at “The Paperclip” for the first time in his Cup career.

Rowdy also won the Camping World Truck Series race on Saturday, in what was his first win across any series at the Virginia track, to complete a weekend sweep!

We have two ladies that are inducted into The Order, Bernie The Bay Area Bandit and Password Queen as well as Dawn, aka Snoopy!  Both of these players selected Kyle Busch and just logged a cool 45 points for the weekend.

We have a trio of players who picked “Young Money”, Kyle Larson for the win. Although Larson did not win the race, he did have a great outing finishing 3rd at Martinsville and that gave Lonna The Quilt Angel, A&M Aggie Sue, and our current leader Jeremy The Coach 38 crucial points this week.

David The Mudslinging Throttle Jockey picked “Mr. Six-Pack”, Jimmie Johnson, to add to his huge collection of Ridgeway Grandfather Clocks. Johnson did not win the race, but he did give The Throttle Jockey Dude 32 points.

The only player who did not exchange places with someone this week is our leader, Jeremy The Coach.  In analyzing the rest of the 20 players, there was a massive shakeup throughout the leaderboard!

This next quartet of players either climbed up or slid seven (7) places.  The negative side of the movement scale finds both Edie The Las Vegas Super Star and Jason the Latent Tie Dye Hippie, Wild Child, and All Around Edgy Dude who plummeted to 13th and 17th spots, respectively.  However, both A&M Aggie Sue and Carole, aka Rudy moved up the totem pole to reside now in 4th and 7th, respectively.

Cole The On Demand Baseball Player had a really rough race gathering up only 2 points from Denny Hamlin and tumbling six (6) places and now lives in 18th place!

Rounding out the top five movers is Bernie The Bay Area Bandit and Password Queen.  The Bandit snuck up the leaderboard three places to sit in 15th.

One third of the Redneck Fantasy League, seven players, had an extremely rough Sunday at Martinsville.  All seven players were riding shotgun with Martinsville standout Denny Hamlin and really took it in the shorts gathering up only 2 points! The list of unhappy players this week include Karen The Highly Opinionated Southern Belle, Leon Your Most Humble Sheriff, Jim, aka Chiefy, Edie The Las Vegas Super Star, the aforementioned Cole The On Demand Baseball Player, Jerry The Buschwacker, and finally Jason The Latent Tie Dye Hippie, Wild Child, and All-Around Edgy Dude.  This is a first that one third of the entire Redneck Fantasy League is awarded “The Crappiest Pick of The Week” award!

Even though Zee, aka Sissy scored 36 points this week, it was not nearly enough to get her evicted from The Outhouse this week!  So once again she literally sits in firm control of The Outhouse!

Next week NASCAR delivers the first night race of the year from the Texas Motor Speedway.

For the seven players who had a horrible Martinsville race and were the winners of “The Crappiest Pick of The Week”, I believe that here is a song that we will all be singing til the Texas race!