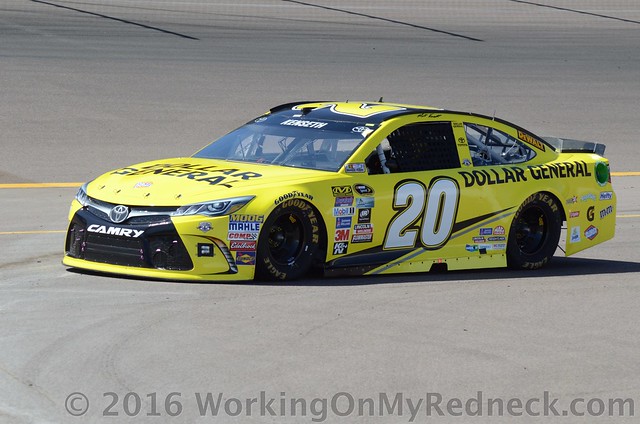 Well it has been a very busy five weeks for Your Most Humble Sheriff.  I was fortunate to get media credentials for the Las Vegas and Phoenix NASCAR races, as well as last week’s IndyCar races at PIR!  Additionally, I have made a mad dash back home to Fresno for a week’s visit with my two sons, Jason The Latent Tie Dye Hippie, Wild Child and all Around Edgy Dude, Jeremy the Coach, and my grandson, Cole the On Demand Baseball Player. Additionally, I will be visiting my grand-daughter, as well as my Sissy, aka Zee!

I also do believe that a Saturday night at the Tulare Thunderbowl to watch some sprinters and midgets is in my future!  I am sure that I will be paying a visit to David The Mudslinging Throttle Jockey at those races, too.

If the title and the photo did not give it away this week the Redneck Fantasy League really likes Matt Kenseth!  There are four players, the husband and wife duo of Dawn, aka Snoopy and Carlton The Doorman, as well as Bernie The Bay Area Bandit and Password Queen join forces with Jeremy The Coach, all are rooting vigorously for Kenseth at Texas!

There are four drivers that have two players each in their corner!

This week both Jerry The Buschwacker and Dan The Numbers Cruncher are putting all their marbles in the basket of Mr. Six-Pack, Jimmie Johnson!

Likewise, both Zee, aka Sissy and her older sibling Jim, aka Chiefy are combining to solidfy the rooting section of “Sliced Bread”, Joey Logano.

And I must announce that it is with much chagrin as well as totally against her better judgement that Karen The Highly Opinionated Southern Belle has chosen “Blazingly Bad” Brad Keselowski this week at Texas. Conversely, Cole The On Demand Baseball Player has chosen “Bad Brad” very willingly!

Lastly, Edie The Las Vegas Super Star and her “loud mouthed brother-in law,” better known to all as Leon Your Most Humble Sheriff are “all in” with Carl Edwards this week!

Doing the ol basic math from my schooling in the previous century leaves me with the number of five.  That number of five are number of players who are in bidnez for themselves this week!

This weekend the racing moves the the Dallas-Ft. Worth metroplex, the Texas Motor Speedway.  To those who have never been there I just wonder “does Ft. Worth ever cross your mind”?