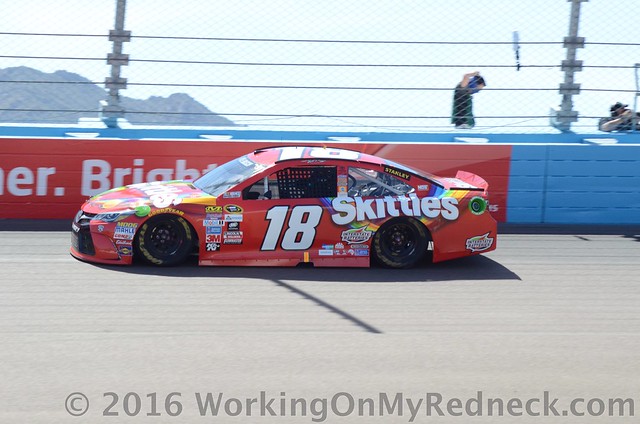 KyBu led just 34 of 334 laps in the Joe Gibbs Racing No.18 Toyota Camry and held on for a 3.904-second margin of victory in the Duck Commander 500. Busch’s second Sprint Cup win of the season was his second in a row, his second at the 1.5-mile track and the 36th of his Sprint Cup career.  Additionally, this was KyBu’s ninth weekend sweep, second sweep in a row this season, and his eight win in the last 32 races since returning from his 2015 foot and leg injury!

This week there was a trio pf players who selected Kyle Busch to win the race at the TMS. Those three players rooting for KyBu were Doug The Former Mudslinger and Psychic, Turned Kettle Corn Dude, A&M Aggie Sue, and Jason The Latent Tie Dye Hippie, Wild Child, and All-Around Edgy Dude.  All three players grabbed a nifty 44 points this week.

Both Zee, aka Sissy, and Jim, aka Chiefy logged a very noble 38 points from Joey Logano’s third place finish.

Additionally the duo of Jerry The Buschwacker and Dan The Numbers Cruncher were able to secure 37 points from Jimmie Johnson’s fourth place finish.

Rounding out the top five scorers this week are Edie The Las Vegas Super Star and Leon Your Most Humble Sheriff receiving  35 points from Carl Edwards’ seventh place finish.

To begin with there was a trio who shared the largest movement this week. Both Doug The Former Mudslinger and Psychic, Turned Kettle Corn Dude and Dan The Numbers Dude climbed up the totem pole five places Sunday. Conversely, Carole, aka Rudy plummeted five spots!

Marc NN (No Nickname) lost four positions after the checkered flag waived and landed in a tie for 8th place.

Both Linda The Cookie Mom and Edie The Las Vegas Super Star elevated themselves up the leaderboard two spots to land in a tie for 10th place.

Round out the top five movers this week is Jim, aka Chiefy, Jason The Latent Tie Dye Hippie, Wild Child, and All-Around Edgy Dude.  Both Chiefy and The Edgy Dude stepped up one place in the standings. Meanwhile back at the control center, Leon Your Most Humble Sheriff stumbled down one position to rest in 17th place this week.

In actuality most all of the players faired very well this week.  there were no single digit scores logged so selecting a player for “The Crappiest Pick of the Week” is somewhat difficult. Nevertheless, the winners of this award this week are Cole The On Demand Baseball Player and Karen The Highly Opinionated Southern Belle.  Even though these two scored 23 points, they were the lowest scoring players of the week!

For the third week in a row Zee, aka Sissy, literally and figuratively sits atop the throne in The Outhouse!  The battle for this prestigious position is a very hard fought and tough battle between Sissy and her brother, Jerry The Buschwacker!  There are just five point that separate her from The Buschwacker this week.

Next week NASCAR moves to another of it’s short tracks, the Bristol Motor Speedway where there are bound to be feelings hurt, bruised egos, and crumpled sheet metal!

For our leader, Jeremy The Coach, I have only this small bit of advice, “don’t look back”, they are gaining on you!