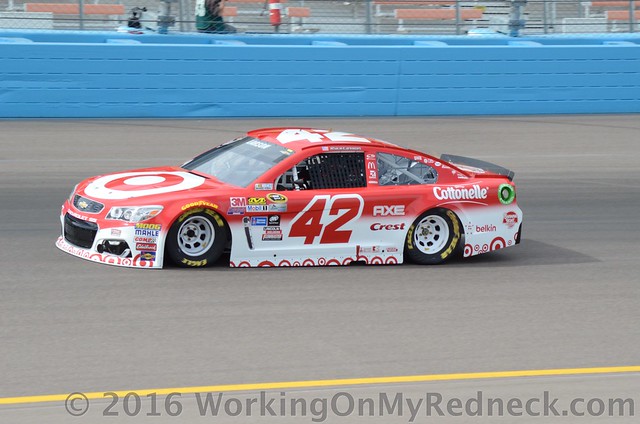 The traveling circus left Martinsville a couple of weeks ago without any egos terribly bruised, there were no bloddy noses, very little sheet metal crumpled, and thankfully no serious wounds from gunfire!

Now having said all that I do have a feeling that this weekend after the Food City 500 at Bristol Motor Speedway there may be a few more cases of bruised egos, a jaw sock or two, and most definitely there will be some discussions about driver’s heritage after the race!

Well the above photo says it all.  One fifth of the fantasy league, 4 players, have put their money on “Young Money”, Kyle Larson, to drive his Target Chevy into Victory Lane at Bristol.  Those four players that were seen pushing a Target buggie around the mall this week are Jim, aka Chiefy, Cole The On Demand Baseball Player, Marc NN (No Nickname) and Dan The Numbers Cruncher.

Ranking second this week on the fantasy league “wish list” of the players is “Blazingly Bad” Brad Keselowski.  The Redneck Fantasy League P.I.witnessed Dawn The Snoopy One, Jerry The Buschwacker and Jeremy The Coach at their neighborhood taverns pounding down the Miller Light this week.  Were they all really thirsty, or are they embibing in the spirits of their pick for Bristol?  That question will be answered Sunday.

There are three drivers that have two players in their rooting section this week.

First there are Carlton The Doorman and David The Mudslinging Throttle Jockey who are in way deep with Denny Hamlin at Bristol.

The sister-in-laws, Zee, aka, Sissy and A&M Aggies Sue were seen stalking the FedEx truck around their neighborhood this week.  I am not totally sure what that was all about, but I do know one thing, they both have all their marbles in with Denny Hamlin at Bristol.

Lastly, there are two players, Carole, aka Rudy and Kilimanjaro Bobby that are squarely in the rooting section for Cousin Carl Edwards at Bristol.

That leaves eight players, almost one third of the fantasy league this week, who are not aligned with any other players in their Bristol support.  That means that all those players are in bidnez for themselves!

Good luck to all and “keep your hands to yourself”!