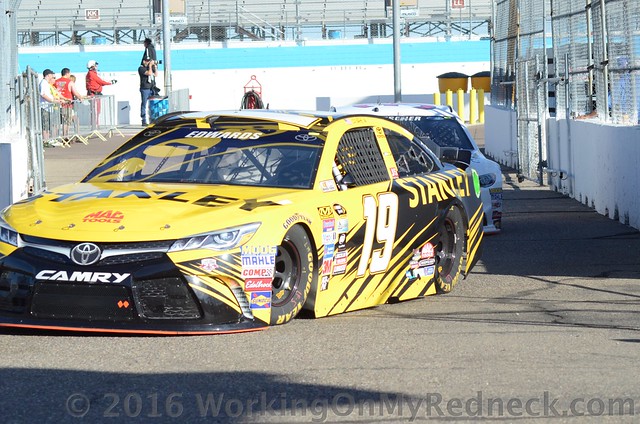 Carl Edwards rode the pole position at the Food City 500 to his first victory of the season while leading 276 laps at Bristol Motor Speedway on Sunday.  Dale Earnhardt Jr. bounced back from a problem starting his car on the opening green flag that sent him two laps down to a second-place finish.  The Food City 500 was a story of comers and goers today.  However there was one common denominator today at Bristol, it was Carl Edwards who led more than half of the entire race, a total of 276 of the 500 laps!

We now have a tie at the top of the leaderboard!  Kilimanjaro Bobby has caught Jeremy The Coach and both sit in a tie for the top spot on the totem pole this week!

This week we have a pair of players, Carol, aka Rudy and Bobby Blue Crush, who were riding shotgun in the Comcast Busines Toyota with Carl Edwards at Bristol Motor Speedway.  For their efforts they each were able to log maximum points this week, a nifty 45 big ones!  As mentioned above, that 45 points for Bobby Blue Crush catapulted him into a tie for the lead with just four races left in this segment.

Well this week the second highest scorer is none other than Leon Your Most Humble Sheriff!  After having a couple of off weeks, he is ready to make a run towards to top in the last four reaces of this segment.  This week The Sheriff was the sole player that grabbed 39 points and was pulling for the Stewart-Haas Racing No. 41 Chevy driven by Kurt Busch, formally known as “The Outlaw” prior to his legal issues with his former girlfriend, Patty Driscoll!

There were two players that had chosen Kevin Harvick for their winner today, Zee, aka Sissy and A&M Aggie Sue.  They are both pleased that they were able to grab 35 points for thier Bristol Sunday.

Both Bernie The Bay Area Bandit and Doug The Former Mudlsinger and Psychic, Turned Kettle Corn Dude added 32 points to their totals today.

Rounding out the top five scorers this week is Linda The Cookie Mom who had the foresight to select Jamie McMurray and because of that tallied up a nice 28 points for her totals.

This week, because of the compacted scores in parts of the leaderboard there was wide spread movement.  There were only two players, Jeremy The Coach and Pallet Jack Driver, as well as A&M Aggies Sue who remained in their previous positions after Bristol.  That will give you an idea of the type of movement that I am talking about this week!

The largest mover for the week is Leon The Retired Airline Captain, Part-Time Cardiologist and Strawberry Picker rocketing up the leaderboard eight (8) places after Bristol now sitting in a three way tie with Carlton The Doorman and Linda The Cookie Mom for 7th position.

Another player who had a week that she would just as soon forget was Karen The Extremely Opinionated Southern Belle, crumbling undrer the pressure and sliding six (6) spots situating herself into 14th position.

Likewise, Lonna The Quilt Angel did not get the result that she was hoping for Sunday.  The Quilt Angel slid down the totem pole five (5) places to now reside in 17th place.

This week picking “The Crappiest Pick of The Week” was a no-brainer.  Lonna The Quilt Angel picked “Rowdy”, “The Shrub”, aka Kyle Busch as her winner for Bristol.  On the surface that would be an extraordinary selection, unfortunately today it was not so good.  The Quilt Angel only received 3 points for ol Kylie’s 38th place finish!

There is more news this week.  We have a new “Prince of The Poophouse”!  After the Bristol race Zee, aka Sissy was evicted from the dominate control that she had excercised over the past three weeks.  The new winner of “The Outhouse Award” this week is our youngest player, Cole The On Demand Baseball Player, who was only able to grab a microscopic 6 points from his man, Kyle Larson!

Next week the traveling circus unloads at the Henrico County Fairgrounds, better know as the Richmond International Raceway!