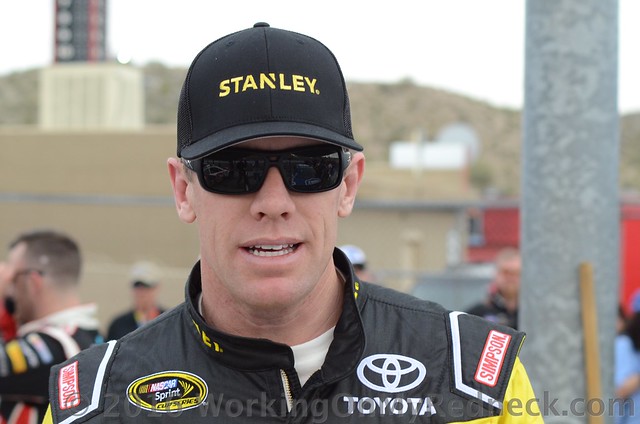 The honeymoon at Joe Gibbs Racing is now officially over!

Yes, on Sunday at Richmond International Raceway, Carl Edwards won his second straight NASCAR Sprint Cup Series race in the Toyota Owners 400 and the fourth in a row for JGR, but he did so with a last-lap bump-and-run on teammate Kyle Busch, who was seeking his third victory in four events.

“We did everything right — be smart,” Busch was told on his radio, after Edwards moved the No. 18 Toyota up the track in Turns 3 and 4 and beat Busch to the finish line by .675 seconds.

Busch took the advice. No doubt seething inside at the loss of a race he seemed poised to win, he maintained radio silence.

Let the war of words and pouting begin within JGR!

Now on with The Redneck Fantasy League news.

Jeremy The Coach has regained sole posession of the top spot on the totem pole this week, by the ever slim margin of one single point!

This week this fraternity is actually a sorority of two!  Both Zee, aka Sissy and Bernie The Bay Area Bandit were fortunate and forth right in their selection of Cousin Carl Edwards and scored the maximum points of 45 big ones.

Additionally, Dawn, aka Snnopy, David The Mudslinging Throttle Jockey and Dan The Numbers Cruncher all logged 37 points this week, however they all did not have the same driver! Both Snoopy and The Throttle Jockey were rooting for Kevin Harvick, while The Numbers Dude received his score from Kasey Kahne.

Rounding out the top five scorers for the week is a strange trio.  The unlikely trio consists of Lonna The Quilt Angel, Carole, aka Rudy and Jeremy The Coach and they all racked up a nice score of 36 points from Denny Hamlin’s 6th place finish.

After last week’s major upheaval, and large scale movement throughout the entire spectrum of the leaderboard, I can report that this week that there was wide scale, but in very small increments.

The biggest mover this week was Bernie The Bay Area Bandit and Password Queen.  The Bandit pulled herself up four places this week to sit now in 7th place.

However, Marc NN (No Nickname) fell off of the train tracks and tumbled three spots, landing this week in 19th place.

Zee, aka Sissy continues to try to scale her way up the leaderboard from her hibernation at, near, and in The Outhouse.  Sissy tip-toed up two spots that has put her in 17th place.

With the exception of Jeremy The Coach, A&M Aggie Sue, Jim, aka Chiefy, Jason The Latent Tie Dye Hippie and All Around Edgy Dude, Jerry The Buschwacker, as well as Cole The On Demand Baseball Player, the rest of the entire fantasy league moved one position up or down!

You know that the players had a relatively good race when the player who gets “The Crappiest Pick of The Week” award scored 27 points!  One would think that a score of 27 points would make you relatively safe from such humiliation.  Not this week, my friends!  Even though he scored 27 points, which would be a realtively decent week, Cole The On Demand Baseball Player not only gets “The Crappiest Pick of The Week” award, he also double dips and is still stuck in control of “The Outhouse” award this week!

Next week the haulers make the trek back to “Sweet Home, Alabama“!