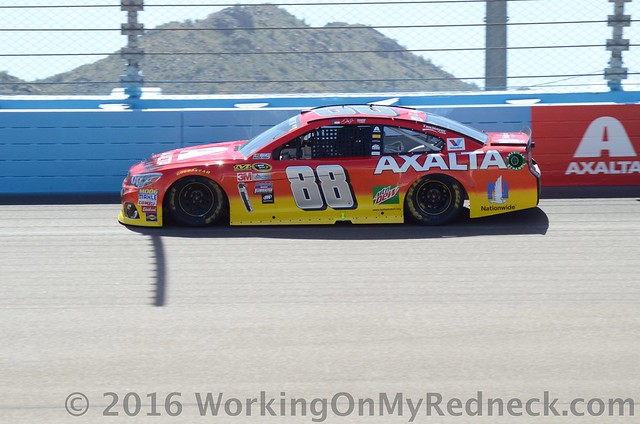 Does it come as a surprise to anyone who may be The Redneck Fantasy League overwhelming favorite this week at Talladega?  If it is a surprise then someone has been sleeping under a rock for the last year or two!

Even though Dale Jr. has not as of yet won a race in 2016 Talladega is his own personal playground.  For a few years he did lay dormant, but in the last couple of years the No.88 HMS Nationwide Chevy has risen like the Phoenix!

For those who may have a short memory, let me recap the Daytona 500 for you.  Llate in the Daytona 500, you may recall that Junior was charging to the front like a warm knife through butter when catastrophe struck and Amelia broke loose, spun coming out of turn four, crashed into the inside wall and ended Earnhardt’s day.  Amelia you may ask, who the heck is Amelia? Amelia is the name that Dale Jr. has given to the car that lightening fast car that won two of the restrictor plae races for him last year, as well as given him a couple of the second place finishes in other races.  So it was only apropos that his team brought her down to Daytona for the 2016 Daytona 500!  Unfortunately Amelia ended up in a crumpled pile of sheet metal after the Daytona 500.

Not to fear Junior Nation, the HMS No.88 team did some major reconstructive surgery including major orthopedic work, some cosmetic plastic surgery, put a new wrap on her, and she is on her way to Talladega for another plate race!  So it appears that the seven players, Karen The Highly Opinionated Southen Belle, Lonna The Quilt Angel, Doug The Former Mudslinger and Psychic, Turned Kettle Corn Dude, Bobby Blue Crush, Jeremy The Coach, Jerry The Buschwacker and Dan The Numbers Man must have gotten that memo from Hendrick Motorsports this week, and all are riding shotgun in Amelia with Dale Earnhardt, Jr. at Talladega!.

Carlton The Doorman, Cole The On Demand Baseball Player, as well as Marc NN (No Nickname) are hanging their collective hats on the hat rack of “The Busch Man”, Kevin Harvick this week. I know that two of the three players are old enough to wet their whistles with Harvick’s refreshing sponsor, however I must caution The Coach to watch The On Demand Baseball Player very closely!

Menwhile Jim, aka Chiefy, Carole, aka Rudy and Edie The Las Vegas Super Star are very certain that Kurt Busch will  break out and log his first victory of the 2016 Sprint Cup season, as well as lock himself into The Chase.

Lastly, both David The Mudslinging Throttle Jockey and Linda The Cookie Mom are hoping that Tony Stewart can erupt from his two year long slump, drive his car into Victory Lane, and punch his tcket into his final attempt at The Chase and the championship.

For all the math majors in The Redneck Fantasy League you will know that there are six players left who, in this election year, would be called independents!  However, I prefer to categorize them as in bidnez for themselves!

This is Talladega, baby!