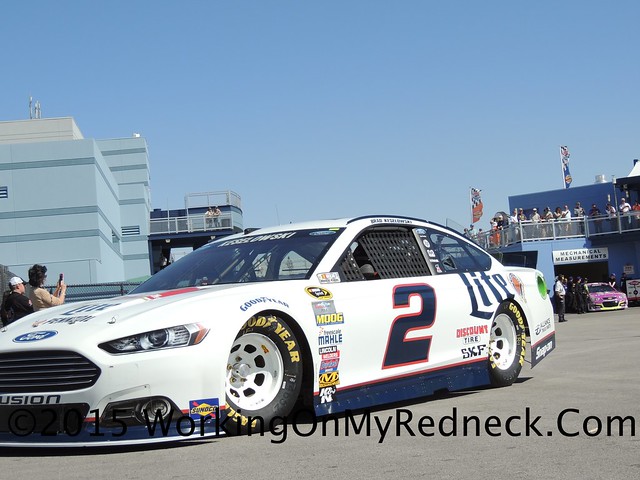 Brad Keselowski surged to victory Sunday at Talladega Superspeedway, emerging from a wreck-filled showdown in the GEICO 500.

Keselowski’s Team Penske No. 2 Ford was just .111 seconds ahead at the end of the 10th NASCAR Sprint Cup Series race of the season. Keselowski’s second victory of the season was the 19th of his NASCAR premier-series career and his fourth at the 2.66-mile Alabama track. He led five times for a race-high 46 laps.

Kyle Busch finished second in the Joe Gibbs Racing No. 18 Toyota. Austin Dillon, pole-starter Chase Elliott and Jamie McMurray completed the top five — as the last in a series of multicar crashes erupted behind them.

With the threat of rain hanging over the event, racing intensified as the forecast worsened near the halfway point. Though reports of scattered sprinkles popped up at moments during the race, it ran the complete 188-lap, 500-mile distance without interruption.

The race was slowed by several multicar wrecks, including a 21-car stack-up in the 159th lap. Jimmie Johnson slid in front of a large pack after a bump from Kurt Busch, entangling more than half the 40-car field with some degree of damage.

This week there was nobody within the fantasy league that selected “Blazingly Bad” Brad Keselowski.  Therefore, this prestigious award is unoccupied this week!

For those who were unable to watch the race you missed a really good destruction derby vs. a NASCAR race!  Unfortunately sometimes these restictor plate races can be a place that gathers up piles of crumpled sheet metal and loads them back onto the race team haulers so that when they return to their race shops the remains can have a proper burial!

You know that it was a rough week when the highest scoring players racked up just 35 points.  Well that is exactly what happened this weekend., both David The Mudslinging Throttle Jockey and Linda The Cookie Mom were rooting for the recovering Tony Stewart at Talladega.  Even thoug Smoke got out of the car and Ty Dillon filled in for him, Stewart receives the points and the money for today!

Carol, aka Rudy, Jim, aka Chiefy and Edie The Las Vegas Super Star all were riding shotgun with the driver formally known as “Outlaw”, now going by his given name, Kurt Busch.  This trio grabbed a nice 33 points for their Sunday.

Meanwhile, Carlton The Doorman and Marc NN (No Nickname) were sipping on some Busch and really hoping that Kevin Harvick could slingshot the pack coming off turn 4 today. Harvick got caught up in the massive crash in the tri-oval as the checkered flag was waving, but was able to pull off a 15th place finish and give this duo 27 points.

Round out the top five scores this week was Bernie The Bay Area Bandit.  The Bandit Girl really had a very mediocre score with Joey Logano as her man.  However in light of the destruction derby at Talladega her 17 points ranked her as the fifth highest scorer of the race!

Have you ever looked into the blender after you have turned it off?  Well if you have then you know what the leaderboard looks like this week!  The only player who did not move from their position last week was Jason The Latent Tie Dye Hippie and All-Around Edgy Dude, everyone else swapped places with someone!

The largest mover this week was Doug The Former Mudlinger and Psychic, Turned Kettle Corn Dude.  The Kettle Corn Dude slithered down the totem pole five (5) places and landed in 11th place.

The tandem of David The Mudslinging Throttle Jockey and Marc NN (No Nickname) propelled themselves up the totem pole four (4) spots to rest in 14th and 15th, respectively this week.

This trio of players, a sorority if you will, Linda The Cookie Mom, Edie The Las Vegas Super Star and Lonna The Quilt Angel make up the next group of movers.  Both The Cookie Mom and The Las Vegas Super Star bettered their positions this week by three (3) places, now holding down the 6th and 8th places, respectively.  Conversely. The Quilt Angel fell three spots to 19th place.

The next group would be noted as a gaggle of players.  The group consists of six players, Karen The Extremely Opinionated Southern Belle, Dan The Numbers Cruncher, Jim, aka Chiefy, Bernie The Bay Area Bandit, Carole, aka Rudy and Leon Your Most Humble Sheriff all moved just two positions this week.  Rudy and Chiefy were the only players of that group who actually bettered their postions this week.

The Opinionated One, The Numbers Dude, Your Most Humble Sheriff and The Bandit each slid down two spots this week.

The remaining eight players slid up or down one spot on the leaderboard.

This week we have a seve way tie for “The Crappiest Pick of The Week”!  There were seven players who seemingly had one of the best picks at the drop of the green falg, Dale Earnhardt, Jr. However, again this in this restictor plate race “Amelia” let him down and he spun all by himself and crashed out of the race.  Later he came back to log laps and got caught up in Carl Edwards’ crash that probably sent “Amelia” to her grave!  Those who will share this award this week are Dan The Numbers Cruncher, Jerry The Buschwacker, Jeremy The Coach, Bobby Blue Crush, Doug The Former Mudslinger and Psychic, Turned Kettle Corn Dude, Lonna The Quilt Angel, and lastly Karen The Extremely Opinionated Southern Belle.  All of these players were awarded a microscopic 1 point!

We have a new “Prince of The Poophouse“!  Jerry The Buswchwacker has evicted Cole The On Demand Baseball Player from “The Outhouse” this week!  The Buschwacker is sitting squarely on the throne with and 11 point cushion this week!

With just two races left in this segment, NASCAR will be invading the Kansas City next weekend.