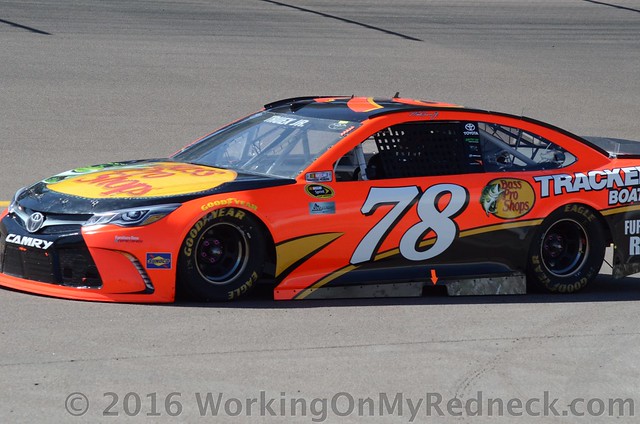 Well with this segment winding down, there are just two races left, there is a three way tie this week for who is favored among The Redneck Fantasy League to win in the Go Bowling 400 at Kansas Speedway!  Since the other two drivers have been featured with photos this segment, I have chosen the Furniture Row Racing No. 78 Toyota driven by Martin Truex, Jr. as the featured photo this week.

Our current leader points leader, Snoopy Dawn, leads the contingent of players that are riding the Truex wave this week, flanked by Carole, aka Rudy and David The Mudslinging Throttle Jockey. Both Snoopy and Rudy are in the hunt for some 1st segment money so they are really paying close attention to these last two races. Whereas the Mudslinging Throttle Jockey is hoping not to tank and slide back down towards The Outhouse, and be our first two time Outhouse Award winner!

Zee, aka Sissy, Jim also known as Chiefy, and A&M Aggie Sue are staying the course this week with Mr. Six-Pack, Jimmie Johnson.  Sissy is praying heavily that ol J.J. will lay a big number on her so that she will keep her distance from being crowned a two time Outhouse Award winner.  The drama builds between Sissy and The Throttle Jockey!  A&M Aggie Sue is betting that she will keep her place in the top 5 this week.  Meanwhile, ol Chiefy is hoping to climb up one or two more positions before the end of this segment.

The three players that are on the Carl Edwards frieght train this week are Lonna The Quilt Angel, Linda The Cookie Mom and Jason the Latent Tie Dye Hippie and All-Around Edgy Dude.

There are two players who will be riding shotgun with “Blazingly Bad” Brad Keselowski this week at Kansas.  Those two players hanging with The Kes are Carlton The Doorman and Marc NN (No Nickname).

Meanwhile, Bobby Blue Crush and Jeremy The Coach are hoping that Clint Bowyer can pull a rabbit our of his hat this week and give HScott Motorsports their very first Sprint Cup victory.

Lastly, Bernie The Bay Area Bandit and Karen The Highly Opinionated Southern Belle really hope that Kasey Kahne can break out of his long winless streak and punch his ticket to The Chase.

For those players not mentioned above, now numbering 6 players, they are in bidnez for themselves this week!

Good luck to all at Kansas. I hope that after the race you are not feeling like you are nothing more than “dust in the wind”!