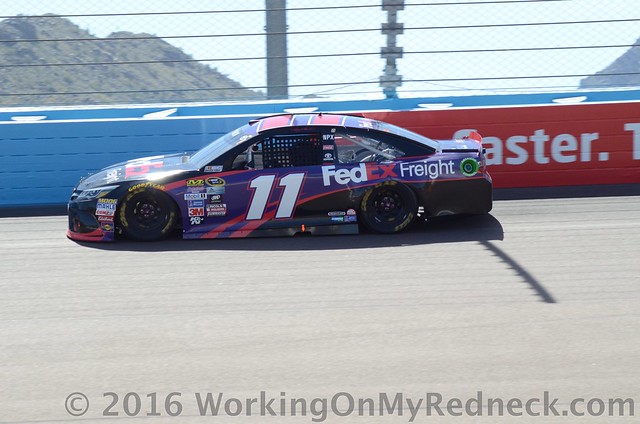 Denny Hamlin already has one victory, that one being the Daytona 500, this season.  With that victory came the ticket punch towards the 2016 Chase for The Championship at Homestead! But can he do it again?  Three players this week are thinking that he can.

The support for this week’s race is widely scattered among five different drivers in the AAA 400.  It seems to be an odd week for our selections at “The Monster Mile”.

Just marginally, Denny Hamlin seems to have gathered the most support from within The Redneck Fantasy League, three players are riding shotgun with him at Dover.  This week the players who will be putting all their marbles in “The Delivernator’s” marble sack are Bobby Blue Crush, Bernie The Bay Area Bandit and A&M Aggie Sue.

There are four drivers that have a pair of players, not to be confused with a pair of plyers, rooting them on.

This week Snoopy Dawn and Zee, aka Sissy will be loading up cases of Monster Energy Drink and really hoping that Kurt Busch will deliver a victory, as well as max points into their totals column.

Likewise, Carole, aka Rudy and Cole The On Demand Baseball Player are hoping that “Rocket Man” Ryan Newman will have a break through race, drive his hot rod into Victory Lane, as well as hoist the hardware into the air!

Lonna The Quilt Angel and Jim, aka Chiefy are thinking that Kasey Kahne can finally emerged from his early season funk and help propel them into some kind of final 1st segment standing respectibility! We shall see after the checkered flag waves on Sunday.

Lastly, David The Mudslinging Throttle Jockey and Jason The Latent Tie Dye Hippie and All-Around Edgy Dude are grasping at straws or sneaking out on an extremely thin limb by selecting Jamie McMurray.  I would say that McMurray would be a dark horse by most handicappers.  I’m just sayin’………

For all you mathmaticians there were just eleven people that had teamed up with other players to support a driver this week.  That leaves ten players to claim that they are independents, after all this the presidential primary seaon.  Another wayto put it is that those players are totally in bidnez for themselves this week!

I am wishing you all good luck because after this race there will most definitely going to be a “Heatache Tonight”!