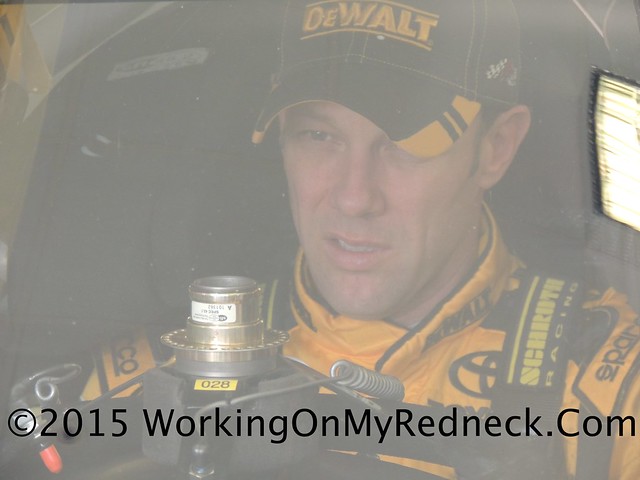 Kenseth led 48 of 400 laps in the Joe Gibbs Racing No. 20 Toyota. His triumph in the AAA 400 Drive for Autism was his third at the 1-mile track and the 37th of hisSprint Cup career.

Larson, seeking his first premier-series win, held on for second in theChip Ganassi Racing No. 42 Chevrolet. He led 85 laps and wound up just .188 seconds behind the race winner at the checkered flag.

This week there was only one player that selected Matt Kenseth as the AAA 400 race winner and that was Carlton The Doorman.I have alwasy said that I would rather be lucky than good and The Doornan was that and therefore received a nifty 44 points to close out segment number one!

Second highest scorer of the week honors goes to Jerry The Buschwacker this week.  The Buschwacker was really hoping that “Young Money”, Kyle Larson, was going to score his first Sprint Cup victory, but nevertheless Larson gave The Buschwacker 40 big points.  Larson was highly competitive, and led 85 laps during the 400 lap race.

The duo of Lonna The Quilt Angel and Jim, aka Chiefy faired well today with thier selection of Kasey Kahne.  Kahne’s 4th place finish gave these two players 37 points to round out this segment.

Rounding out the top five scores of the week are Bobby Blue Crush and Bernie The Bay Area Bandit who logged 35 points from Denny Hamlin’s 7th place finish.

One third of the players, seven in total, remained in their previous place on the leaderboard this week.  That means that 14 players exchanged places spots when the checkered flag flew at Dover.

The biggest mover of this week was Carlton The Doorman, rocketing up the leaderboard five (5) places and landing in a tie for second place with A&M Aggie Sue.

Both Jeremy The Coach and Edie The Las Vegas Super Star dropped like a hot potato after Dover, tumbling four (4) spots landing in seventh and eleventh, repsectively.

Two more players collapsed this week as well.  Both Carole, aka Rudy and Karen The Highly Opinionated Southern Belle plummeted three (3) places on the totem pole.  Rudy was riding high in second place and The Extemely Opinionated Belle was languishing in 17th place prior to the Dover race.  When the dust settled Rudy fell to the last money paying position, 5th, and The Highly Opinionated One landed on the front porch of The Outhouse, 20th place, but could not oust the current occupant!

The next quartet of players are a mixed bag of succes.  A&M Aggie Sue, Bernie The Bay Area Bandit,and Zee, aka Sissy all crept up slightly, two places this week.  However, Doug The Former Mudslinger and Pyschic, Turned Kettle Corn Dude slithered down two spots.

The remaining five players, Kilimanjaro Bobby, Jim, aka Chiefy, Lonna The Quilt Angel, Jerry The Buschwacker, and Dan The Numbers Cruncher all stepped up one position!

For the final race of the first segment “The Crappiest Pick of The Week” goes to the only player who tallied only a single digit score this week, Edie The Las Vegas Super Star could only muster up 9 points.

Even though Cole The On Demand Baseball Player rallied and scored 25 points for the Dover race, it was not nearly enough for him to get served an eviction notice from “The Outhouse”. So the first segment “Outhouse Award” and plaque willbe sent to The On Demand Baseball Player!  There is no doubt that Cole will obviously relish the fact that he is the first two-time winner of this prestigious award!

Next week is the 2016 All-Star race, as well as the CWTS race from Charlotte.  So, in essence, we all get a week off and can therefore, in the words of Glenn Lewis Frey, we can “take it easy”!

TIL NEXT TIME, PULL YOUR GLOVES UP, FLIP YOUR VISOR DOWN, AND LET’ GO RACIN”!