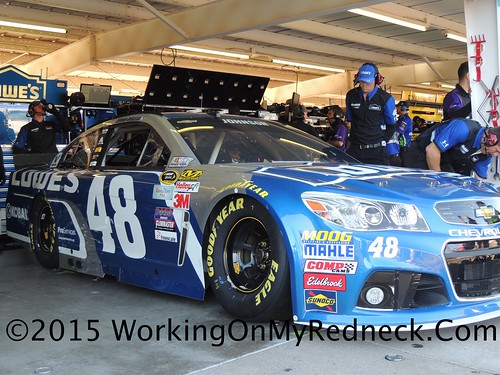 After a weekend off, and the running of the weirdest All-Star race in recent memory, it is time to get back into some Sprint Cup point racing.  I hope that you all enjoyed your week off and that now you are ready for segment #2 of The Redneck Fantasy League competition!  For those of you who are cashing some of that “Redneck Fantasy League Big Money”, please do not spend it all in one place.  Spread that economic growth thorough out your community and let it flow!

Looking at the way that one third of The Redneck Fantasy League rallied around one driver for Charlotte, it almost resembles the way that the choices look at Talladega or Daytona.  Nevertheless, this week there are seven players, Lonna The Quilt Angel, Bobby Blue Crush, Carlton The Doorman, Edie The Las Vegas Super Star, A&M Aggie Sue, Bernie The Bay Area Bandit, and David The Mudslinging Throttle Jockey that will be riding shotgun with Jimmie Johnson during the Coca Cola 600 at Charlotte.

Meanwhile Karen The Highly Opinionated Southern Belle, Jeremy The Coach and Dan The Numbers Cruncher are putting all their marbles in Martin Truex, Jr’s marble sack this week.

Linda The Cookie Mom and Cole The On Demand Baseball Player are betting that this will be the week that Kasey Kahne will capitalize on his recent markedly improved finishes.

Likewise, Snoopy Dawn and the recently annointed Skid-Marc are putting all their money where their mouths are and rooting for the JGR driver, Cousin Carl Edwards.

Finally, Carole, aka Rudy and Leon Your Most Humble Sheriff are hoping that Kevin Harvick will be “Freaky Fast” and they also hope that he will be hoisting the hardware over his head Sunday night!

For all of the math majors in The Redneck Fantasy League, you noticed that there were 16 players mentioned above.  That leaves just six players who will claim to be independents this week.  However, what they really are this week are players that are in bidnez for themselves!

With the starting of this new segment we all have high hopes that we will finish in the top five in twelve weeks and grab some of that big Redneck Fantasy League money. Nevertheless, that thought for some it is just a “river of dreams” this early in the segment!

Good luck to all at Charlotte!