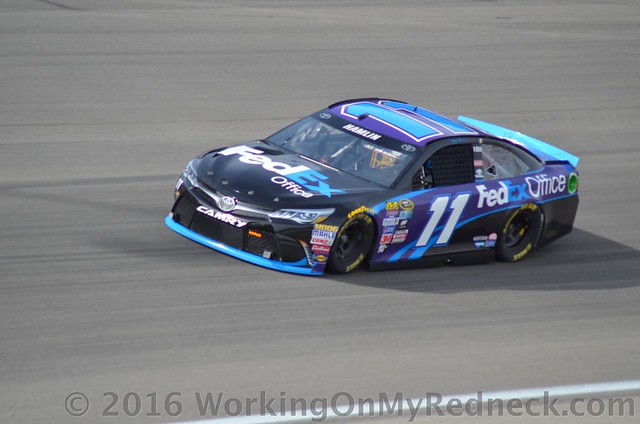 This week NASCAR makes its frist of two summertime appearances in “The Honeymoon Capital” of the East Coast in the Pocono Mountains.  That is right, he race teams unload later this week at “The Tricky Triangle”, Pocono Raceway, for the Axalta “We Paint Winners” 400!  This race track has a very interesting history that, if you are not up on it, you may read the link that installed in this sentence!

It is the consenus by one fifth of the fantasy league, 4 players, that Denny Hamlin will be driving his FedEx Toyota Camry into Victory Lane after the race and hoisting the hardward high above his head for the photographers.  Those four players rooting for Hamlin this week are Carlton The Doorman, Jerry The Buschwacker, Bernie The Bay Area Bandit, as well as David The Mudslinging Throttle Jockey and Newlywed.

There are three players, Lonna The Quilt Angel, Skid-Marc and Cole The On Demand Baseball Player are betting the farm that Matt Kenseth will lead the field to the checkered flag at Pocono.

Equally as positive that their driver, Joey Logano, will be “burning down the house” Sunday night are Bobby Blue Crush, Edie The Las Vegas Super Star and A&M Aggie Sue.

Jeremy The Coach and Carole, aka Rudy think that Carl Edwards will be the victor Sunhday.

Lastly, Kathy The Church Forecloser and Leon Your Most Humble Sheriff are really hoping that, for the “We Paint Winners can go back to back this week and caulk up another victory for his team.

However, there are eight players who think for somne unkonwn reason that their own individual choice will be doing soughnuts at the start/finish line Sunday.  Yes sir, we have a large portion of the fantasy league, more than one third of the players, that are in bidnez for themselves Sunday!

For the two players in “The Outhouse”, Linda The Cookie Mom and Cole The On Demand Baseball Player, maybe they could “learn to fly out of The Outhouse” over the next few weeks!