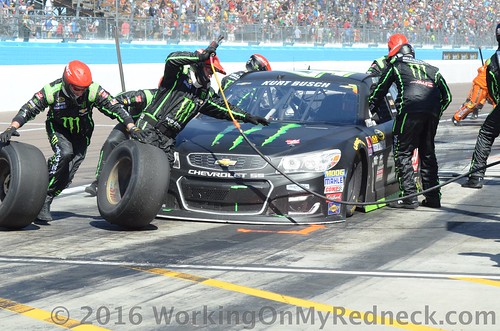 Monitoring a dwindling fuel tank and several powerful cars in his rearview mirror, Kurt Busch held off Dale Earnhardt Jr. and Brad Keselowski for his first win of the 2016 season in Monday’s Axalta ‘We Paint Winners’ 400 at Pocono Raceway.

Busch took the lead at Lap 128 and immediately began playing a fuel-milege game — holding in his clutch throughout the turns to save fuel — as all the leaders worked to conserve fuel.

We have a new leader sitting atop of the totem pole this week, Dan The Numbers Cruncher!

This week there was only one player to celebrate with the winning driver, “The Outlaw”, aka Kurt Busch.  Our resident accountant, Dan The Numbers Cruncher, notched a win into his 2nd segment belt and 44 big points early in the this stretch of competition.

Linda The Cookie Mom was our second highest scorer and almost had a victory today with her selection of William Clyde Elliott, Jr., better known as Chase Elliott. Chase had a very strong car and led for 51 laps towards the end of the race.  On what proved to be the final restart Elliott got shuffled out of the lead and settled for a fourth place finish.

There was a very unlikely trio that also did very well on this rain delayed Monday afternoon race.  These three players, Bobby Blue Crush, Edie The Las Vegas Super Star and A&M Aggie Sue all had selected as their man Joey Logano and was rewarded a nifty 37 points for his fifth place efforts!

Rounding out the top five weekly scorers are Cole The On Demand Baseball Player,Skid-Marc and Jim, aka Chiefy.  Skid-Marc and Cole The Baseball Player Dude were riding shotgun with Matt Kenseth today, while Ol Chiefy was hanging on tight with Kasey Kahne.  All three scored 35 points at Pocono.

There were only three players who remained in their previous week’s position, A&M Aggie Sue, Edie The Las Vegas Super Star, and Jerry The Buschwacker.

The single biggest mover for the week was Zee, aka Sissy. Sissy rocketed up six places to reside now in 10th place.

Both Kilimanjaro Bobby and Chiefy climbed up five places this week!  Bobby Blue Crush now rests in a three way tie for fourth place!  Chiefy sits in ninth place all by himself.

There is a trio who propelled themselves four spots this week.  Linda The Cookie Mom shot up four spots, and out of “The Outhouse” to sit in tie for 16th place. Whereas both Doug The Former Mudslinger and Psychic, Turned Kettle Corn Dude and Leon Your Most Humble Sheriff shamelessly tumbled four places.  Your Most Humble Sheriff now resides in 14th place and The Kettle Corn Dude has a new residence, “The Outhouse”!

Not to be out done, there is a quartet that moved three places this week.  Skid-Marc slithered up the leaderboard three places to sit in a tie for 17th place this week. Conversely, Bernie The Bay Area Bandit, Carlton The Doorman, Kathy The Church Forecloser and Jason The Latent Tie Dye Hippie and All-Around Edgy Dude slipped three spots!

Lastly, Dan The Numbers Cruncher stepped up two spots to take over the top on the leaderboard this week!

Well this week the person who had “the crappiest pick of the week” also now resides in “The Outhouse”!  This week Doug The Kettle Corn Dude gets a two-fer!  He scored a microscopic 6 points and that was enough to evict Linda The Cookie Mom from “The Outhouse” propel himself into it!

Next week NASCAR moves to the backyard of Ford and Chevy, just west of Detroit Rock City, at the Michigan International Speedway!

TIL NEXT TIME, I AM STILL WORKING ON  MY REDNECK!