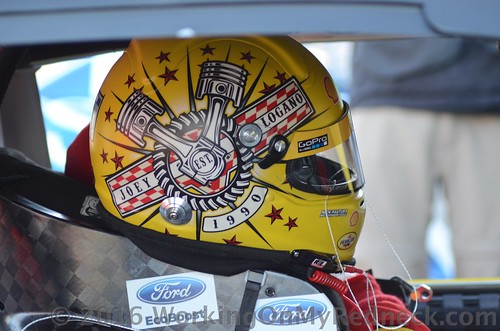 This  week there is a huge amount of diversity in winner selections by our players!  There are as many choices this week in the FireKeepers Casino 400 as we have had so far this season.

There seems to be a consensus, small as it may be, that “Sliced Bread” may be poised to grab another victory this season.  This week there is an odd fraternity brewing amongst our player group!  The four players that have banded together to join ranks in the selection of Joey Logano seems to lack any logical connections!  You have our resident accountant, Dan The Numbers Cruncher, Jason The Latent Tie Dye Hippie and All-Around Edgy Dude, Cole The On Demand Baseball Player, and of course Leon The Retired Airline Captain, Part-Time Cardiologist Strawberry Picker, as well as Elephant Driver and Your Most Humble Sheriff. Everyone will have to admit that it is a very diverse amalgamation of characters, and I use that word very loosely, that have coalesced this week!

Equally as diverse, and I might add shady as well, is the group of three players who are rooting for the driver formally know as “The Outlaw” in his prior life, who now goes by his given name of Kurt Busch.  These three players that will be pounding down the Monster Energy Drink this week are Doug The Former Mudslinger and Psychic, Turned Kettle Corn Dude, A&M Aggie Sue, and our newest player Kathy The Church Forecloser!  Go figure how they teamed up this week!

Additionally this week, there are five drivers who have a rooting section of two players each.

The first grouping of two players are hanging their collective hats on the fortunes of Dale Earnhardt, Jr. are a logical pair.  The mother/son combo of Lonna The Quilt Angel and Bobby Blue Crush would make sense that they may choose the same driver at Michigan, after all Dale Jr. swept Michigan a couple of years ago!

Jeremy The Coach and Zee, aka Sissy are joining forces this week to cheer on “The Rocket Man”.  Could this be the race that Ryan Newman punches his ticket into “The Chase Fraternity”?

Meanwhile, Snoopy Dawn and Jim, aka Chiefy must be thinking that “Freaky Fast” Kevin Harvick can close the deal on this lightening fast 2 mile race track and drive his Jimmy Johns Chevy into Victory Lane.

Linda The Cookie Mom and Carole, aka Rudy have different thoughts, however.  These two players obviously are thinking that ol Rowdy, Kyle Busch, can overcome the quirks that have seen his team have mechanical troubles as of late!

Not to be denied this week in their attempt to grab some TV time is the tandem of David The Mudslinging Throttle Jockey and Edie The Las Vegas Super Star. This duo is rooting for the NASCAR Twitter King, “Blazingly Bad” Brad Keselowski to win at Michigan, his home race track.

The last grouping for the week includes Carlton The Doorman and Bernie The Bay Area Bandit.  Both of these players are hanging with Cousin Carl Edwards this week.

As we get into the dog days of summer both the racing gets hotter as well as the tempers!  We will see that sometimes there is bad blood and bad company!

TIL NEXT TIME, PULL YOR GLOVES UP, FLIP YOUR VISOR DOWN, AND LET’S GO RACIN’!