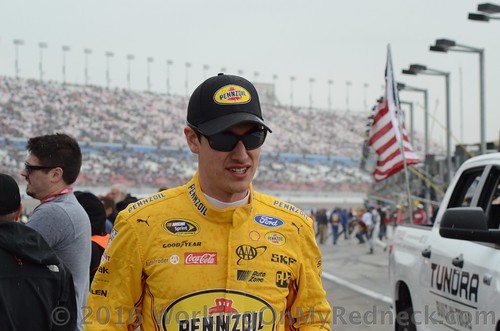 There was one major difference between Joey Logano’s victory in Sunday’s FireKeepers Casino 400 at Michigan International Speedway and his win May 21 in the Sprint All-Star Race at Charlotte. This one counted in the NASCAR Sprint Cup Series standings and punched Logano’s ticket into the Chase.

But it remained abundantly clear that Team Penske already has a handle on the aerodynamic configuration the sanctioning body is considering for 2017.

Logano led 139 of 200 laps at the two-mile track and dominated a succession of restarts, except for one instance on Lap 117 when race runner-up Chase Elliott grabbed the lead from the driver of the No. 22 Ford.

This week we have four players that are in the fraternity, Dan The Numbers Cruncher, Cole The On Demand Baseball Player, Jason The Latent Tie Dye Hippie and All-Around Edgy Dude, and Leon Your Most Humble Sheriff.  All four were riding shotgun with Joey Logano this week and added a cool 45 points to their totals.

Next on the tally list this week are David The Mudslinging Throttle Jockey and Edie The Las Vegas Super Star.  This duo had all their marbles in the sack on “Blazingly Bad” Brad Keselowski and they each received  38 points when all the dust settled at Michigan.

Ranking third on the scoring list this week is Jim, aka Chiefy and Snoopy Dawn.  Both players had selected as “Freaky Fast” Kevin Harvick and each garnered a nice 36 points.

Carlton The Doorman and Bernie The Bay Area Bandit each rattled of 35 points from Carl Edwards today.

Rounding out our top five scorers of the week is a quintet of players.  To begin with three of the players, Doug The Former Mudslinger and Psychic, Turned Kettle Corn Dude, A&M Aggie Sue, and Kathy The Church Forecloser all had their fortunes resting in the hands of Kurt Busch.  Meanwhile  Zee, aka Sissy and Jeremy The Coach were rooting for Ryan Newman.  Nevertheless, they all received 31 points today when the checkered flag flew at Michigan!

There were only two players who held serve this week and remained in their previous slotted positions, Jeremy The Coach and Jerry The Buschwacker!

The single largest mover this week was Carole, aka Rudy,  Rudy dropped like a prom dress this week, falling eleven (11) places and  now residing in 19th place.

Both Bobby Blue Crush and Lonna The Quilt Angel tumbled almost as many spots this week.  This dynamic duo fell ten (10) spots now sitting in 15th and 16th, respectively.

On the positive side of the scale was Leon Your Most Humble Sheriff who rocketed up the ladder nine (9) spots this week.

Both Zee, aka Sissy and Jason The Latent Tie Dye Hippie and All-Around Edgy Dude had good weeks, as well.  Both players climbed up seven (7) places in the standings.

Rounding out the top five movers is David The Mudslinging Throttle Jockey who slithered up the totem pole five (5) places this week.

We have a tie once again for “The Crappiest Pick of The Week” with Linda The Cookie Mom and Carole, aka Rudy scoring a microscopic one (1) point this week!

We also have a new person that is firmly in total control of “The Outhouse” this week, Linda The Cookie Mom!

The Sprint Cup will have off next weekend, they all can hang back at the shop, and will have time to try forget what they “came there to forget”!.