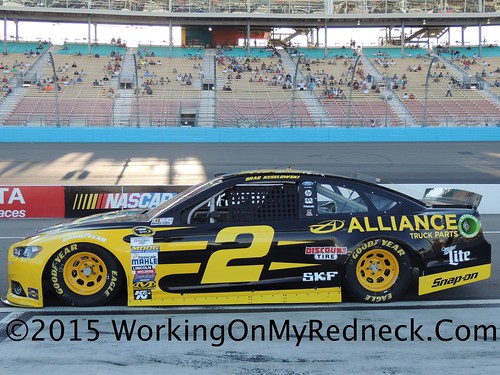 Brad Keselowski captured his first NASCAR Sprint Cup Series victory at Daytona, holding on to the lead after executing a pass with 14 laps remaining that catapulted him from third to the front of the Coke Zero 400 on Saturday.

Keselowski previously had four restrictor-plate victories, but those all came at the Talladega Superspeedway.

The “Big One” in this Daytona race came on Lap 89 and collected 21 cars in a wreck that was sparked by Jamie McMurray turning sideways in the middle of the pack.  I guess you could say that McMurray was “flirtin’ with disater” at Daytona!

This week there was no player that had selected “Blazingly Bad” Brad Keselowski, and therefore this award goes unrewarded this week!

David The Mudslinging Throttle Jockey added 38 points to his totals after his choice, Joey Logano, finished 4th in the Coke Zero 400.

There were 13 players who had selected Dale Earnhardt, Jr.  Those 13 players are Dan The Numbers Cruncher, Cole The On Demand Baseball Player, Jeremy The Coach, Jason The Latent Tie Dye Hippie and All-Around Edgy Dude, Kathy The Church Forecloser, Skid-Marc, Linda The Cookie Mom, Carole, aka Rudy, Carlton The Doorman, Snoopy Dawn, Zee, aka Sissy, Karen The Highly Opinionated Southern Belle, as well as Leon Your Most Humble Sheriff all scored a mediocre 20 points.

Jim, aka Chiefy was able to still gather up 18 points despite the fact that Joey Logano punted Kurt Busch as they came to the checkered flag!

Rounding out the top five scorers of the week is Bobby Blue Crush, who logged 13 points via Matt Kenseth’s 28th place finish.

This week there is a pair of players who are our biggest movers, each moving seven places.  Edie The Las Vegas Super Star rocketed up the ladder seven spots, landing in third place with her score of 40 points.  Conversely, A&M Aggie Sue plummeted seven places landing ninth place.

Bernie the Bay Area Bandit continued her slide towards “The Outhouse” this week, falling five positions to rest in 14th spot, slightly short of the bottom of the heap.

Also falling from grace this week was Jerry The Buschwacker, who slid four places to land in 20th place after Daytona.

Both Skid-Marc and Linda the Cookie Mom moved up three places to reside in 17th and 18th place, respectively.

Rounding out our top five movers this week are David The Mudslinging Throttle Jockey, Carole, aka Rudy, Lonna The Quilt Angel and Doug The Former Mudslinger and Psychic, Turned Kettle Corn Dude.  The Throttle Jockey and Rudy moved  up two positions to land in 2nd and 16th, respectively. Meanwhile, Lona The Quilt Angel and the other Mudslinger, Doug The Kettle Corn Dude lost two places and they are sitting in 19th and 21st place, respectively.

This week we have a four-way tie for “the crappiest pick of the week” award!  Doug The Former Mudslinger and Psychic, Turned Kettle Corn, A&M Aggie Sue, Jerry The Buschwacker, as well as Bernie The Bay Area Bandit all received 3 points from Kevin Harvick.  So these four get to bask in their utter failures!

Even though Snoopy Dawn scored 20 points this week, it was not enough to get her evicted from “The Outhouse“.  So she will continue to sit firmly in control of “The Outhouse” once again this week!

Next week it is on to Kentucky.