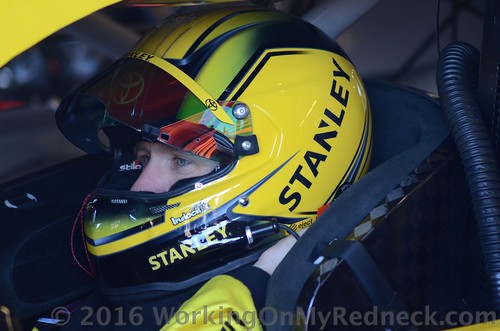 This week the NASCAR traveling circus, Camping World Truck Series, XFINITY Series, and the Sprint Cup teams, rolls into to the newly repaved Kentucky Speedway for racing on Thursday, Friday and Saturday nights.

After gathering and analyzing the data for this week’s choices it is quite apparent that there lacks uniformity, that there may be some driver mistrust, and some form of confusion from within the ranks of The Redneck Fantasy League!  It appears that there are several small splinter groups who have banded together on a very small scale to support a few drivers.

This week we have two drivers with a very small rooting section.

Zee, aka Sissy, Doug The Kettle Corn Dude and Bernie The Bay Area Bandit are banding together to support, Rowdy, Kyle Busch this week to notch another win on his belt.

Meanwhile, Jim, aka Chiefy, Jason the Latent Tie Dye Hippie and All-Around Edgy Dude, as well as Leon The Retired Airline Captain, Part-Time Cardiologist and Strawberry Picker, and Your Most Humble Sheriff are riding shotgun at Kentucky with Carl Edwards.

There are three drivers who will have a very small rooting section of two players each this week.

Both Lonna The Quilt Angel and David The Mudslinging Throttle Jockey are thinking that this will be the week that “Young Money”, Kyle Larson will grab his very first Sprint Cup victory and punch his ticket to The Chase.

Additionally, Karen The Highly Opinionated Southern Belle and Kathy The Church Forecloser are banding together, as sisters sometimes do, putting all their marbles in Joey Logano’s marble sack at Kentucky.

Lastly, A&M Aggie Sue and Dan The Numbers Cruncher are thinking that Denny Hamlin will drive his FedEx Toyota into Victory Lane for the victory celebration Saturday night.

I have accounted for just slightly over half of the fantasy league above, 12 players.  That means that nearly one half of the players, 10 remaining players, have individual choices this week. That probably signals that there will be massive movement within the standings when the checkered flag flies Saturday night at Sparta, KY!

I am sure that there will be several players who will be lamenting, re-examining, an bemoaning “what we ain’t got” when the checkered flag falls at Kentucky!

Will The Numbers Dude maintain his lead when the racing ends Saturday night?  Those and other questions will be answered Saturday night!