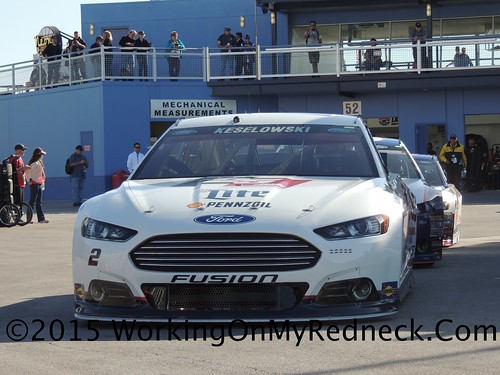 Brad Keselowski played the fuel-mileage game to perfection to capture his second consecutive victory and his third triumph at Kentucky Speedway in the Quaker State 400 Presented by Advance Auto Parts on Saturday.

With the win, Keselowski unofficially clinched a spot in the Chase for the NASCAR Sprint Cup.

Keselowski, who led 75 laps and was out of gas, coasted across the finish line just ahead of Carl Edwards!

Our former “cellar dweller”, Snoopy Dawn, was the only player who successfully selected the race winner this week.  Ol Snoopy racked up a nifty 44 points with Brad Keselowski winning the race.  Additionally, by choosing the winner, Snoopy was able to extract herself from The Outhouse this week!

A trio of players, Zee, aka Sissy, Bernie The Bay Area Bandit and Doug the Former Mudslinger and Psychic, Turned Kettle Corn Dude selected Carl Edwards this week and for their efforts grabbed 39 points.

Once again we have a tandem of players scoring the same number of points, 34.  Carlton The Doorman was all in with Matt Kenseth this week, but Jeremy The Coach was betting the farm on Kevin Harvick.

Rounding out the top five scorers this week is Linda The Cookie Mom who added 32 points to her totals with Martin Turuex, Jr’s 10th place finish.

There were only three players who remained in their previous spots on the leaderboard after the Kentucky race, our leader, Dan The Numbers Cruncher, Leon Your Most Humble Sheriff, and Bobby Blue Crush!  That means that nineteen players exchanged places after Kentucky!

The single biggest mover this week is Karen The Highly Opinionated Southern Belle.  The Extremely Opinionated One’s choice for Kentucky, Joey Logano, exited early, only gave her 2 points, and caused her to drop like a hot potato nine (9) places to land in 13th spot!

Rounding out the top five movers of the week is a group that consists of one third of the Redneck Fantasy league, seven players in total.  Those seven players include Jason The Latent Tie Dye Hippie and All-Around Edgy Dude, Carole, aka Rudy, Linda The Cookie Mom, Jerry The Buschwacker, Doug The Former Mudslinger and Psychic, Turned Kettle Corn Dude, Snoopy Dawn as well as Lonna The Quilt Angel.  This entire list moved up two (2) places with the exception of The Quilt Angel, who dropped two (2) spots.

This week we have a tie for “The Crappiest Pick of The Week” award.  The sisters Knapp, Karen the Highly Opinionated Southern Belle and Kathy The Church Forecloser, each selected Joey Logano and received just 2 microscopic points.  As we all have learned when you score a single digit for your weekly tally, it is most likely that you will be the recipient of this award every single week!

Lastly, we have a new occupant residing in “The Outhouse” this week, Skid-Marc.

Next week NASCAR unloads in the Granite State, Louden, NH, which is about 67 mile northwest of Boston.