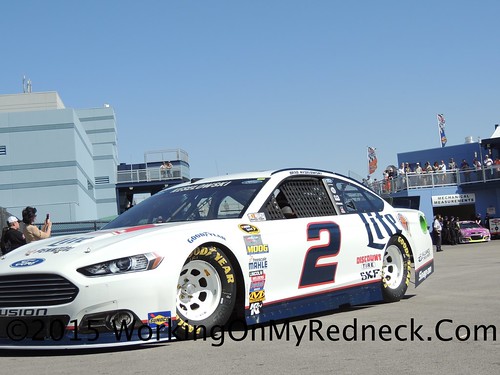 This weekend the Sprint Cup teams roll Northeast up I-95 all the way into New England.  More specifically the haulers will be unloading their race cars about 67 miles northeast of Beantown (Boston) in the Granite State at the New Hampshire Motor Speedway in the hamlet of Louden,NH.

Almost one quarter of The Redneck Fantasy League, all totaled that is five players, are putting all their marbles in the sack of “Blazingly Bad” Brad Keselowski. The five player rooting section consists of Karen The Highly Opinionated Southern Belle, Skid-Marc, Kathy The Church Forecloser, Dan the Numbers Cruncher, and Leon Your Most Humble Sheriff.

This week Matt Kenseth has a fairly large rooting section as well.  Snoopy Dawn, Edie The Las Vegas Super Star, A&M Aggie Sue and Bernie The Bay Area Bandit are hoping that Kenseth can drive the Dollar General Toyota into Victory Lane and hoist up the hardware in victory.

Meanwhile, both Lonna The Quilt Angel and Jerry The Buschwacker are hoping that neither will get a “sport clip” when the checkered flag flies at Louden. Instead, they are hoping that “Cousin” Carl Edwards will be driving his Toyota into the winning celebration.

Not to be outdone, Bobby Blue Crush and Zee, aka Sissy are thinking that when a win absolutely, positively has to happen on Sunday that Denny Hamlin will be putting his FedEx Toyota in the big middle of that celebration.

Rounding out this weeks picks are a very unlikely duo bonding together and rooting for the Furniture Row Racing Toyota and Martin Truex, Jr.  When I said that there was an unlikely duo I was not pulling your leg at all!  This tag team consists of Doug the Former Mudslinger and Psychic, Turned Kettle Corn Dude and Jason The Latent Tie Dye Hippie and All-Around Edgy Dude.

Doing basic math in public, I have discussed 15 players’ choices and that leaves 7 players this week that have declared their independence.  But we all know that this really means that they are in bidnez for themselves!

Good luck to all at Louden and “don’t look back”, they could be catching you!