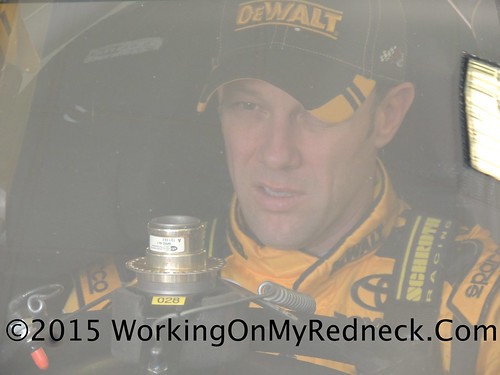 Matt Kenseth came on strong late to get by Martin Truex Jr. and later Denny Hamlin for the win in Sunday’s NASCAR Sprint Cup Series New Hampshire 301 at New Hampshire Motor Speedway. The driver of the No. 20 Joe Gibbs Racing Toyota also had to survive a rash of cautions late to secure the victory.

Kenseth took the lead for first time at Lap 258, passing Truex for the first position. Kenseth then passed his Joe Gibbs Racing teammate Hamlin on Lap 271 to take the lead back to stay after Hamlin stayed out under a Lap 264 caution while nearly the rest of the field pitted.

The win is Kenseth’s second of the season, third at New Hampshire and the 38th of his Sprint Cup career. All of Kenseth’s wins at the 1.058-mile track have come in his four years at JGR.

This week we have  a quartet of players that were riding with, and rooting for, Matt Kenseth at Louden.  It may be a coincidence that all four of the people that were riding shotgun with Kenseth are females!  Those four players are Bernie The Bay Area Bandit, A&M Aggie Sue, Snoopy Dawn and our new leader Edie The Las Vegas Super Star.  All four of these ladies received a nifty 44 points this week.

Carlton The Doorman came out smelling like arose this week as well with his pick of Joey Logano.  Logano rallied at the last restart to log a third place finish, giving The Doorman 38 points!

Likewise, Linda The Cookie Mom must be all smiles.  The Cookie Mom had all her marbles neatly stuffed into the sack of “Freaky Fast” Kevin Harvick, and for that she received 37 points.

Our most junior player, Cole The On Demand Baseball Player, must be thanking his lucky stars that he had decided to “Stick With The Biff” this week!  Greg Biffle rallied back to finish in 5th place when the checkered flag flew and that gave him 36 points.

Rounding out the top five scorers of the week in Jeremy The Coach.  The Coach was the sole person in the rooting section for Kyle Busch this weekend and it paid off nicely with 35 points.

Once again there was widespread movement within the fantasy league.  The only players that remained in their previous spots are Karen the Highly Opinionated Southern Belle, Carole, aka Rudy and Doug the Former Mudslinger and Psychic, Turned Kettle Corn Dude.

After the checkered flag flew David The Mudslinging Throttle Jockey was the single biggest mover of the week, tumbling six (6) places this week to land in 9th place.

Meanwhile Bernie the Bay Area Bandit steadily marches up the leaderboard, moving up four (4) places and sitting in 7th place.

Snoopy Dawn seems to be on the road to recovery this week moving up three (3) places, sitting now in 17th place and appearing to distance herself from The Outhouse!

Rounding out the top five movers is Jerry The Buschwacker.  The ol Buschwacker has barely crept out of the shadows of The Outhouse to now sit in 19th place.

Additionally we have a brand new “Princess of The Poophouse”, Lonna The Quilt Angel.  The race for “The Outhouse” is gathering up “steam”, so to speak, between The Quilt Angel, Skid-Marc, The Buschwacker, as well as The Kettle Corn Dude!

Next week the haulers will be rolling into a very historic venue, The Indianapolis Motor Speedway.

With just five races left in the 2nd segment, there may be a few players who are already beginning to count their chickens thinking that they are safe.  Maybe someone in the top five may be thinking that he or she is “ten feet tall and bulletproof”!  Don’t make the mistake of feeling comfortable because if you look at the numbers a slip or stumble and the whole leaderboard shakes up!