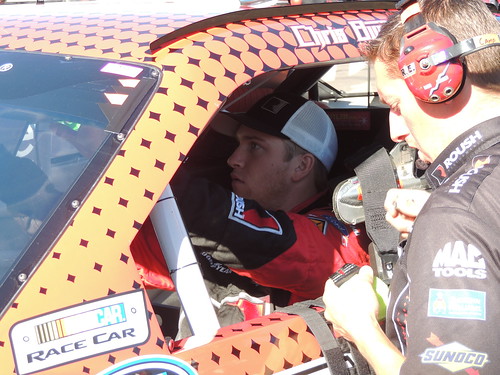 Chris Buescher sat in his car on pit road, dreaming of the possibilities.

NASCAR had just red-flagged Monday’s rain-delayed Pennsylvania 400 when a heavy fog settled over Pocono Raceway after 138 of a scheduled 160 laps, and Buescher was the unlikely race leader.

“I’m thinking of every kind of rain dance I can,” Buescher said on his radio.

When NASCAR ended the stoppage by calling the race because of weather, Buescher had his first victory as a NASCAR Sprint Cup Series driver, and Front Row Motorsports had its first win since David Ragan took the checkered flag at Talladega Superspeedway 118 races ago.

This week this nobody had Chris Buescher and his Front Row Racing Ford on their radar scope, he was not even remotely considered!  Therefore, this award goes back on the shelf this week.

Both David The Mudslinging Throttle Jockey and A&M Aggie Sue were our top score getters for the Pocono race, picking “Blazingly Bad” Brad Keselowski. Each of those players were able to add 40 points to their 2nd segment totals from “Kes” finishing in 2nd place.

Denny Hamlin’s 7th place finish gave Lonna The Quilt Mom, Carole, aka Rudy and Linda The Cookie Mom all 34 points, and put some pep in their steps today.

There was a quintet of players that scored 33 points this week.  Four of those players, Jason The Latent Tie Dye Hippie and All-Around Edgy Dude, Cole The On Demand Baseball Player, Edie The Las Vegas Super Star and Leon Your Most Humble Sheriff all received their points from Carl Edward’s 8th place finish.  Carlton The Doorman received his points from Kyle Busch’s 9th place finish.

The single largest mover this week is Jeremy The Coach.  The Coach did not have a very good race dace, scoring only 6 points, plummeted six (6) paces after Pocono, now resting in 9th place!

Second on the movement scale this week is Bernie The Bay Area Bandit, slipping and tumbling five (5) spots on the leaderboard, landing in 13th position.

Likewise, Snoopy Dawn took a nosedive after the race was called due to fog.  Snoopy slipped down four (4) paces, sitting now in 17th position.

It appears that this week there was some kind of mad rush to try to secure “The Crappiest Pick of The Week”?  This week we have four players who could only rally up a single digit score for their efforts, qualifying them for a four-way tie for this prestigious weekly award.  Those four players include Doug the Gandy Candy Dude, Snoopy Dawn, Jim, aka Chiefy and Skid-Marc!

Lastly, we have a new resident in “The Outhouse” this week!  With his microscopic 6 points scored, Skid-Marc took over control of “The Outhouse”, ousting Jerry The Buschwacker this week!

Next on the NASCAR schedule is the legendary road course in the Finger Lakes of New York, not that far from Syracuse,NY.