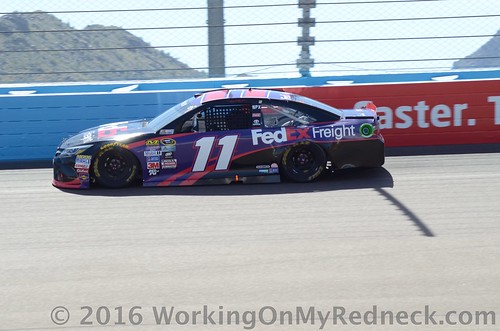 Denny Hamlin won Sunday’s Sprint Cup Series Cheez-It 355 at Watkins Glen International after leading the final 10 laps in the 90-lap event.  This is the Joe Gibbs Racing driver’s second win of 2016 and his first at the New York road course.

The race ended on some high drama after Keselowski made contact with Martin Truex, Jr., punting him, and turned him around in the final turn to the checkered flag. This allowed defending race winner and victor of Saturday’s XFINITY Series race, Joey Logano, to run away with second!  Also caught up in the final turn melee was Kyle Larson, who was running 4th at the time.

The Fraternal of The Go Fast

Once again this week this award goes undelivered since no player had Denny Hamlin as their pick for The Glen.

The  Shakers and Movers

The biggest scorers of the week are our current leader on the totem pole, Edie The Las Vegas Super Star, and the semi-surging Water Cooler Leon.  Each of these two players had chosen A.J. Allmendinger and were rewarded handsomely with 37 points.

We have a quintet of players who were able to snatch 36 points from two different driver’s efforts..  Three of those players include Zee, aka Sissy, Jerry The Buschwacker and Skid-Marc gathered up their points from Kyle Busch’s 6th place finish.  While Jeremy The Coach and Doug The Gandy Candy Dude received their points from Tony Stewart’s 5th place results.

Rounding out the top five scorers this week is a quartet of players.  Those four players include Linda The Cookie Mom, Bernie The Bay Area Bandit, David The Mudslinging Throttle Jockey and Jason The Latent Tie Dye Hippie and All-Around Edgy Dude.  All four of these players were banking on Kurt Busch driving his hot rod into Victory Lane.  Even though that did not happen they did very well settling for 31 points Sunday.

There was not widespread movement this week.  In fact, 12 of the 22 players remained in their previous spots when the checkered flag flew at The Glen.

This week the biggest mover was Dan the Numbers Cruncher.  The Numbers Dude slithered down the totem pole three (3) places to fall out of the top five, landing now in 6th place.

Next is a quartet of players that moved 2 spots on the leaderboard this week.  Both David The Mudslinging Throttle Jockey and Jeremy The Coach climbed up two (2) spots Sunday, now residing in 5th and  7th, respectively.  Not nearly as fortunate was Carlton The Doorman and Carole, aka Rudy as both of these individuals tumbled two spots landing in 8th and 13th, respectively this week.

Lastly, there were five players who moved up just one spot.  Zee, aka Sissy, Bossman Leon, Linda The Cookie Mom and Bernie The Bay Area Bandit all stepped up one position.  Conversely, Jason The All-Around Edgy Dude slipped one position Sunday.

“The Crappiest Pick of The Week” award is very easy to select this week.  There was only one player who was so unfortunate to score a microscopic 9 points, and that player is Dan The Numbers Cruncher!  Congratulations Numbers Dude!

For the second week in a row Skid-Marc will retain his grip on “The Outhouse Award”!  However, both Jerry The Buschwacker and Doug The
Gand Candy Dude are well within striking distance of Skid-Marc!

With just two races left in this segment and the fact that there are pockets of very tightly contested positions, I would warn you not get feeling so secure in your position on the leaderboard.  “Don’t look back”, someone may be catching you!

Next week the Sprint Cup has an off week before they head to Bristol.