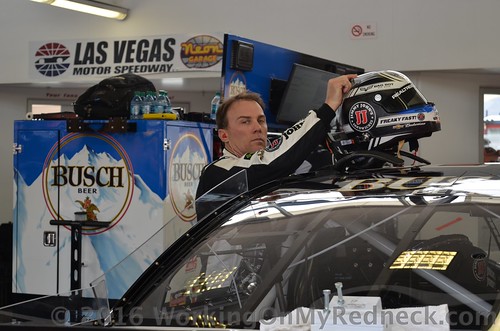 Just about 24 hours after the original green flag flew at Bristol, the checkered flag waved and the 500 laps were complete!

This week we have two players who were riding shotgun with “Freaky Fast” Kevin Harvick.  Both Bobby Blue Crush and Edie The Las Vegas Super Star were the only ones who were bold enough to select Harvick as their man for Bristol, along with that cam 44 huge points.  This was only Harvick’s second victory at “The World’s Fastest Half Mile”!

With that 44 points that The Las Vegas Super Star scored this week it pretty much seals her fate as the second segment winner!  With a 45 point lead going into the last race at Michigan, she could score zero points and still have at least a one point lead over Water Cooler Leon, who presently sits in second place!

We have a trio of players who were the largest movers this week, Bobby Blue Crush, David The Mudslinging Throttle Jockey and Linda The Cookie Mom. Kilimanjaro Bobby rocketed up the leaderboard five (5) spots this week, and that ascension was just in the nick of time because it landed him in 9th place this week!

Both David The Mudslinging Throttle Jockey and Linda The Cookie Mom had an off week!  Both players plummeted five (5) places this week landing in 10th and 16th, respectively.

Another trio of players moved four (4) position this week.  Cole The On Demand Baseball Player fared the best out to the three players, climbing up four (4) places this week, now resting in 6th place.

Conversely, Jeremy The Coach and Carole, aka Rudy slithered down the totem pole four (4)spots to reside now in 11th and 17, respectively.

Meanwhile, Jim, aka Chiefy modulated him position by three (3) places to sit in 12th place.

There is a quartet of players that moved two (2) spots.  We have a duo that were successful in their climb up the totem pole this week, some people know him as The Bossman, some as Your Most Humble Sheriff, and some know him as Water Cooler Leon, but nevertheless you all know him, and with his successful climb up the leaderboard this week is Skid-Marc!

However the remaining two players in that quartet did not fare so well.  Both A&M Aggie Sue and Bernie The Bay Area Bandit fell from grace this week landing in 4th and 14th, respectively.

Still another group of six of players moved one spot.  Dan The Numbers Cruncher, Carlton The Doorman, Jason The Latent Tie Dye Hippie and All-Around Edgy Dude all stepped up one position this week.  But both Doug The Gandy Candy Dude and Jerry The Buschwacker each slipped one position.

It is quite amazing that the player who wins this weeks “Crappiest Pick of the Week” was not the week’s biggest mover.  Nevertheless Jeremy The Coach, with his microscopic 3 points wins this award this week.

We have a changing of “The Outhouse Guard” this week!  Both The Buschwacker and The Gandy Candy Dude showed their prowess in picking winners this week.  Although they did not have the lowest score this week, they did gather up a single digit, 8 points, for their tally this week!  And for that high degree of skill shown they miraculously find themselves in a tie for “The Outhouse” this week!

TIL NEXT TIME, PULL UP YOUR GLOVES,FLIP YOUR VISOR DOWN, AND LET’S GO RACIN’!